Maddow Tries to Dunk on Pro-Lifers. Posterizes Herself. 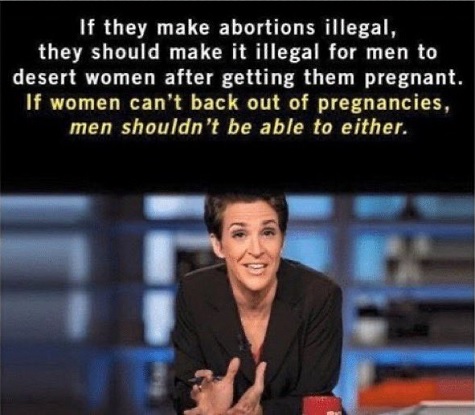 Rachel Maddow took to the airwaves with one of those impassioned talks she gives where she leans in solemnly and then acts as if she made a great point just because she raised her eyebrow while saying it.

Here’s what she said:

Um. Has she heard of child support? Doe she know that men go to jail for not paying child support? To be clear it’s legal for women to kill their unborn children but illegal for men not to pay for them? In fact, the pro-lifers are the more consistent ones here, despite your quizzically raised eyebrow.

And does she also know that pro-lifers tend to be religious types that support things like marriage which protects women and children? You might remember marriage, it’s that little institution that all of civilization is built on. It’s that thing the left rolls its eyes about as being outdated.

Most pro-lifers would support carrying babies to term and then seeing them supported by a mother and father who were married. It’s a wacky concept, huh?