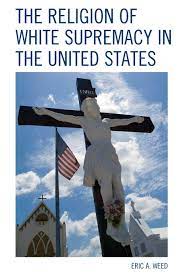 Want some proof? Sure. This is easy. Check out these headlines and stories from major mainstream media linking Christian beliefs with white supremacy. Notice they don’t give evidence for such a thing. They just keep repeating it. Over and Over and Over.

Headline from The Guardian: “There’s a straight line from US racial segregation to the anti-abortion movement.”

An opinion piece by an abortion activist in The Philadelphia Inquirer said, “Don’t be fooled. These violent tactics have never been about abortion. They are about the state-sanctioned perpetuation of white supremacy through reproductive coercion. Being forced to carry a pregnancy is harmful enough. It’s made even more barbaric when considering the maternal mortality rate for Black pregnant individuals. In Philadelphia, Black pregnant women are about four times as likely as white women to die from pregnancy-related causes.”

The Nation: “Why Transphobia Is at the Heart of the White Power Movement. Gender nonconformity threatens a worldview that is fixated on immutable and antiquated gender roles.”

The Nation: “The Long History of the Anti-Abortion Movement’s Links to White Supremacists
Racism and xenophobia have been woven into the anti-abortion movement for decades, despite the careful curation of its public image.”

Ilyse Hogue of Planned Parenthood: Part of, as I say, steeling the spine and building the courage for elected officials is making sure that we own the accurate history of this movement. Clinic violence during the ’80s and into the ’90s was the precursor for the violent extremism we’re seeing now. Why that’s been allowed to continue is because society writ large — and certainly politics — has allowed them to wrap themselves in this faux religiosity and get away with stuff we would never allow in other parts of our culture.

If you talked to any abortion provider, they know what that feels like to be under siege. So really understanding that — and that goes back to the underlying ideology of the modern-day anti-choice movement, and this is not to say every person who identifies as pro-life — but the movement is one that believes in minority control to right Christian men. So there’s just immense symmetry between these ideologies.”

USA Today: “Far-right Trump backers weaponized Christianity against democracy and could do it again…

OK. I always find it ironic that the pro-abortion left, which is built on the work of known racist Margaret Sanger, attacks pro-lifers for being White Supremacist. But we’ve already been over that ground. You get it.

You see, they don’t want to get rid of Christianity. They just want to free it from white supremacy. And they’ll decide what parts to get rid of. You trust them, right?

This is not a theory. Then presidential candidate Hillary Clinton actually said it plainly.

“Far too many women are still denied critical access to reproductive health care and safe childbirth. All the laws we’ve passed don’t count for much if they’re not enforced,” Clinton said, using the euphemism for abortion.

“Rights have to exist in practice — not just on paper,” Clinton argued. “Laws have to be backed up with resources and political will. And deep-seated cultural codes, religious beliefs and structural biases have to be changed.”

Have to be changed.

Obama used the word “transform” all the time.

The left is attacking Christianity because they have to in order to achieve their political goals. I just wish Christians would defend Christianity with the same intensity.

I am reminded of this line from Yeats’ Second Coming:

Turning and turning in the widening gyre
The falcon cannot hear the falconer;
Things fall apart; the centre cannot hold;
Mere anarchy is loosed upon the world,
The blood-dimmed tide is loosed, and everywhere
The ceremony of innocence is drowned;
The best lack all conviction, while the worst
Are full of passionate intensity.