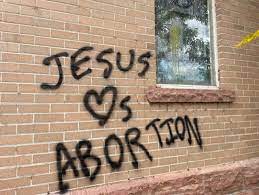 Seriously imagine this report about anyone else: “U.S. Bishops Say 100 Acts of Anti-Catholic Vandalism Since May 2020.”

Imagine 100 Acts of Vandalism against Black Churches!!! Holy crap. Don’t even imagine it because I can’t help but imagine Don Lemon and Anderson Cooper hosting tearful round the clock coverage on the so called “Trump inspired Church burnings.”

It would be a top story. There’d be protests. Riots. Backlash.

The Tablet: An Oct. 10 vandalism of the Cathedral Basilica of the Immaculate Conception in Denver, Colorado, was the 100th incident of destruction to Catholic sites in the U.S. since the U.S. Bishops Conference began tracking the phenomenon in May 2020.

“These incidents of vandalism have ranged from tragic to the obscene, from the transparent to the inexplicable,” said Cardinal Timothy Dolan, Archbishop of New York and chair of the USCCB Committee for Religious Liberty, and Archbishop Paul Coakley of Oklahoma City, chair of the USCCB Committee on Domestic Justice and Human Development in a joint Oct 14 statement. “There remains much we do not know about this phenomenon, but at a minimum, they underscore that our society is in sore need of God’s grace.”

The Oct. 10 incident at the Denver cathedral included satanic and hateful graffiti spray-painted on the exterior wall and door. The next day, the 101st incident took place at St. Peter Italian Catholic Church in Los Angeles, California, where paint was splattered over the exterior.

Incidents have occurred in 29 states over the 16-plus months the USCCB has used the tracker.

A closer look into the records shows that about 40 incidents involved destroying a statue or monument. Another 20 or so involved using graffiti or paint to deface a church site.”

To be clear, I’m not demanding outrage. And I certainly don’t want to make Anderson Cooper or Don Lemon cry. But how about even mentioning it. How about saying, “hmmm, here’s an interesting consequence of some societal change. Maybe it’s worth examining. Maybe it’s worth some of that navel gazing we in the media so enjoy.”

Isn’t it possible that the treatment of the Church in our culture has led to this? Isn’t the constant demonization of pro-life people or people who believe gender is a fact maybe possibly at least partially to blame here?

Isn’t the continued silence an assent? A nod and a wink? Isn’t it possible that the refusal to make a news story out of such an alarming trend is…wait for it…a dog whistle? Isn’t is possible that the news media is encouraging such behavior by not denouncing it?

How many times have we seen the media do that? Some Republican somewhere says or does something stupid and all of a sudden every top Republican in the country has to denounce the actions of this person they don’t even know because to not do so means that you agree with their stupid action.

This all has to stop. Violence and vandalism against one particular group is not ok. This is only going to get worse if nothing changes. And then everything will change and it will be much much worse for a long long while.

Pray that it doesn’t.