Hilarious. Author of Handmaid’s Tale Getting Cancelled for Transphobia. 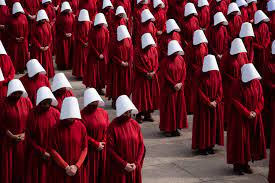 The author of “The Handmaid’s Tale,” which has been celebrated by the left and used as a weapon against conservative pro-life laws is now coming under fire for “transphobia.”

According to The Blaze, “Atwood posted a link to an article by columnist Rosie DiManno questioning the wisdom of “trans activism run amok” and cites various examples of the word “women” being awkwardly and bizarrely excised from history and modern language.

“Certainly there are words — they are slurs mostly — that are no longer acceptable. ‘Woman’ shouldn’t be one of them,” asserted DiManno. “The battleground of language has turned into a baffleground of agendas.”

“Conjuring up an imaginary threat to the word ‘women’ based on a few examples of people on very specific fields using more technically accurate terminology is a transphobic conspiracy theory,” read another response.

“I’m disappointed you shared this because it’s factually untrue. We can still say ‘woman’ & we can also say ‘people’ when it makes sense to use more inclusive language. I’m nonbinary. I also menstruate and gave birth to 3 kids. Saying ‘people with periods’ includes women AND me,” replied one critic.

“Oh look you’re angry language is finally starting to include people like me. Disappointed in you. But not shocked,” tweeted another critic.

“How disappointing. I expected better from you,” responded another detractor.

“[T]he piece has so much transphobic ideology and language you cannot tell me that you’ve read this piece and genuinely believe she is not being transphobic,” read another.

So, the collision between feminists and trans activists may finally be here. Who do you even root for in something like this? #passthepopcorn.