Are you a Recovering Catholic? 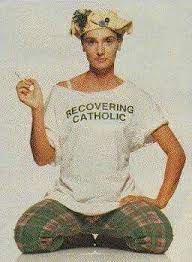 I hear people say “I’m a recovering Catholic.” I guess it’s said flippantly. It’s almost a cliche at this point. But what are you exactly recovering from? A disease? Is faith in Jesus a disease? A disease that’s gone into remission?

Oh my, it sounds bad. What were the symptoms of this fearful disease Mr. or Mrs. Survivor of Catholicitis?

“Oh it’s quite terrible, I assure you. You see, as a Catholic you’re forced to believe that all of creation was fashioned from the mind of a loving God who lavished attention on every minute detail of the universe. But not only that, you have to believe that that very same God created you! And all that power, love, grace and attention that created the cosmos was focused on loving and fashioning you in the womb of your mother. And that every moment of your life you are seen, understood, and loved.”

“And not only that, why that very same God asks us to join Him in acting out of love in every decision we make instead of acting out of our baser instincts of rage, jealousy, greed, rage and covetousness and rage. Always so much rage. But no, you’re called to be joyful and spread the word about all this joy and love. All the time!”

“But I don’t mean to give you the wrong idea. I can see by your eyes, you’re already being hypnotized by this vision. Oh my friend, there’s a whole other darker side to this business. You see, God so loved us that he sent His Son, Jesus Christ (that’s where they get the name Christian, you see) to die on the cross to reveal His love for us. And we too are called to die to the world in our fashion. Maybe nothing as scary and violent as dying on a cross after being tortured by soldiers all day but in little ways too. Sacrificing. Always sacrificing. Doing things for others all the time and expecting nothing in return.

So, it’s things like you’re expected to get up on Sunday morning. Sunday morning, mind you to go to a Church where you and all the other Catholics congregate to thank god and worship Him for all that he’s bestowed upon us. But that’s not even the half of it.

Loving others sometimes means not doing what you want to do. You getting this? So, there’s something you want to do real bad, see but because you’re Catholic you can’t (or shan’t) do it. You see, you might think there’s nothing wrong with seeing someone you’re attracted to and thinking about bedding them down for the night. Fully consensual, of course. Why, the Church frowns on that sort of thing. Very much. You see, they see that as transactional behavior. The Church thinks that you’re called to get more than consent. You’re called to love them. And loving doesn’t mean just sweatily pawing at one another for a few stolen moments in a motel room. You see, even though you both got what you wanted out of it the Church says that’s not enough. You’re supposed to give ALL of yourself. It’s all very confusing. It’s exhausting with all this giving and sacrificing business.

I feel like I’m not doing my argument justice here. If you really want to boil it down to brass tacks, the thing is that it’s old fashioned. It doesn’t take into account “progress.” Yes, that’s it. Progress. The Church is out of step with our modern times. Why, just take a few minutes of your day on Twitter and you’ll see how out of step all that loving talk is. No, but seriously. The Church only believes in two genders. Two!!! Man and woman, I believe they used to call them back in the day. I mean, science has proven that that there are dozens if not hundreds of genders. I’m not up on all the latest research but I read the papers. I know what’s new.

Oh, oh. And I almost forgot. The Church wants to enslave women! Yeah, I almost forgot that. It shows how still influenced I still am by the old patriarchal ways. Even someone as liberated as I can sometimes feel the cold and ancient tendrils reach out from the Middle Ages and wrap themselves around my psyche in unseen ways. Where was I? Oh, right. Enslaving women!!! The Church says that if a woman became pregnant during the aforementioned one nighter in the cheap motel, she should have the baby because that baby is a human being who is loved by God and deserving of our respect and love. It’s just like that ridiculous show where all those women wear hoods and are forced to serve the patriarchy or something. I haven’t seen it, of course but I’m told that’s true. But the Church says that just as God fashioned YOU with loving attention in your mother’s womb, the Church also states that God did the same for that…blob of tissue in its mothers womb. And the Church would urge and implore the woman not to kill said blob. I, however, believe strongly that a woman’s right to choose is paramount.

You see, that’s the thing about the Church I can’t stand. It’s the dehumanization of women!!! Oh, and they worship Mary too. I’m not sure how those two things go together but it’s true. You can take it from me. I’m a recovering Catholic. I’m well versed in their ways because I went to Church once in a while with my parents until I was confirmed. But could you imagine a world where women actually had a baby every time they got pregnant. My goodness the place would be teeming with life! How bad would that be for the environment?

Catholics are very bad for the environment. Terrible. These prudes keep having too many children and their carbon footprint is making the world worse. Thank goodness, these same Catholic parents keep sending their children to reasonable secular colleges that fix most of their kids before they go out into the world. But some still actually make it through while clinging to their religion…even to this day. They’re mostly called “Homseschoolers.” That too needs to be stopped. For the children’s sake. I’m all about helping the children, you see. Homeschooling hurts children. My goodness, these children are brought up without any influence from the government at all. They’re backward. I’ve heard that they don’t even have transexual reading hour at the library. I know, right? For the good of the children, homeschooling must be outlawed. A mother’s right to choose her child’s education must not be paramount to the good of others.

So, as you can see I’ve laid out a pretty damning case against Catholicism. I am recovering from it. But we must be ever vigilant of its return, even in ourselves. Sometimes, in times of trouble and darkness in my own life I find myself turning to Christ. I turn to Him in the hopes of rediscovering that love is at the heart of Creation. I turn to Him in the hopes that I’ll be called out of myself and purified. I turn to Him in the desperate hope that I am known and loved in ways I cannot fully comprehend. And I feel it. I feel something stir in me. I feel love. Yes, by God, you can actually feel love in you. And with it comes hope. And that’s always when I stop because I must cling to the science that has proven that there is nothing. Science shows that we are biological accidents created by an uncaring unknowing and unseen process. Science has proven in studies that life can be created out of ooze and lightning. It doesn’t require consciousness and love at all. The lightning and the ooze created beings that evolved over millions of years into the lonely beings on a desolate rock hurtling around a dying sun who for one brief moment fooled themselves into believing that things like love, grace, free will even existed.

No, we must accept the cold hard truth. And I’m better off for accepting it. Much sadder and sometimes even suicidal but my life is a testament to the fact that I can face the world in all of its horror and stand. Sometimes, you know, when I was a boy I’d stare up at the clouds and imagine them to be things like birds, or flying pigs, or maybe even angels. But the thing is, they’re just clouds. Water and chemicals and things. Lightning and ooze. That’s all. Like I said, I’m not up on the latest research but I know what’s up. Thank God I’m recovering or who knows what foolishness I’d believe.