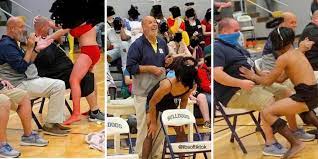 An investigation is underway after photos surfaced on social media depicting a homecoming event at a Kentucky high school where male students partook in a “man pageant.”

The male students seen in photos taken at Hazard High School’s homecoming week festivities on Tuesday wore scant clothing, including women’s lingerie, and gave staff members lap dances in the gymnasium, according to The Courier Journal.

Oh, and those male teens. We call the “minors.” Yes, you have minors giving up lap dances to their teachers. And it’s all good?

And this is Kentucky.

The superintendent is now saying that he’s launched an investigation and will be looking into it. Let me help. Every teacher that was present and didn’t call 911 should be fired.

To be clear, teachers are mandated reporters of child abuse.

Just to get an idea of how this “investigation” is going to go, the superintendent has already issued a statement saying, “At the end of the day, the lighthearted activity just got out of hand.”

Hmmm. How does she know that since she’s just begun her investigation? Or maybe the investigation is just a ploy to make everyone get bored and look away.

But parents should definitely stay out of their schools. These are professionals. They know what they’re doing.