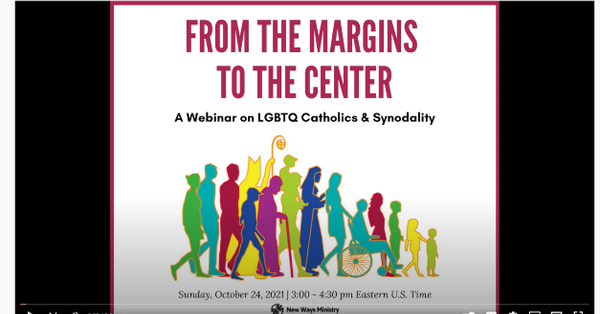 This is a disaster. I cannot express to you how odious New Ways Ministry is to the Catholic Church. They seek to undermine the Church’s teaching on gender and sexuality.

In 2010, the U.S. bishops’ conference said “No one should be misled by the claim that New Ways Ministry provides an authentic interpretation of Catholic teaching and an authentic Catholic pastoral practice.”

That seems like a pretty definitive statement, doesn’t it? But that was sooooooo 2010. Everything’s changed since then.

Last week, Father James Martin, SJ, gave a shout out to the Vatican’s Synod on Synodality for including a video from New Ways Ministry on its website. He called it “a small but historic step forward for #LGBTQ Catholics: The Synod of Bishops @Synod_va includes the organizing work of @NewWaysMinistry, an LGBTQ ministry, on its resource page. As Pope Francis has said, all voices must be heard at the Synod…”

The day after that tweet the link to New Ways Ministry was gone. Tossed into the abyss where it belongs. Left leaning Catholic media threw a fit (obviously.)

And then the most predictable thing happened. The synod’s communications’ director issued an apology for removing the link and restored the link.

Someone made him write that it was his decision and his decision alone to remove the link. Talk about getting thrown under the bus.

Let’s be honest. The truth here is that Fr. Martin has the power in the internal Church right now. He tweeted and things got changed. Apologies were groveled. The apology was “a good example of true reconciliation in the church,” Martin wrote on Twitter.

“Reconciliation” actually just means “do what I say.”

I almost wrote that it’s Fr. James Martin’s Church and we’re just living in it. But it’s not. It’s the Church that was founded by Christ himself. And as confusing as it gets sometimes, in the end it is Christ’s Church.

The Church should include people with same-sex attraction and it should be discussing gender issues but always in the light of Catholic teaching. The Church shouldn’t be modifying its core teachings in order to please twitter and the New York Times.