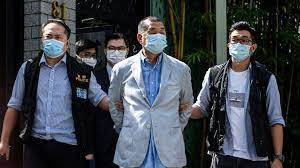 I’m so glad Pope Francis came to an agreement with the Chinese government. Otherwise, can you imagine how bad it would be?

Jimmy Lai, a Catholic and prominent figure in the ongoing pro-democracy movement in Hong Kong, has been sentenced to a 13-month jail sentence for participating in a 2020 vigil commemorating the 1989 Tiananmen Square massacre.

Lai, alongside fellow activists Gwyneth Ho and Chow Hang Tung, received his sentence Dec. 9 for “inciting” and taking part in an “unlawful assembly.”

Lai wrote in a statement read by his lawyer: “[L]et me suffer the punishment of this crime, so I may share the burden and glory of those young men and women who shed their blood [during the 1989 massacre] to proclaim truth, justice and goodness.”

Lai was among a group of thousands of people who defied a Chinese prohibition and attended a candlelight vigil in mid-2020 marking the 32nd anniversary of the Tiananmen Square massacre. Annual vigils to remember the event had been held each year in Hong Kong up to that point; 2020’s vigil was ostensibly canceled over COVID-19 concerns.

During the 1989 clash between protestors and Chinese troops, tanks rolled into Beijing’s Tiananmen Square and military forces opened fire on university students and other citizens calling for democratic reforms. According to one account, as many as 10,000 people died. Information about the massacre is widely suppressed in China.

2021 marks the second year in a row that authorities have forbidden a commemoration of the event.

I share this because none of the mainstream media will. Human rights come from God so tyrants work diligently to stamp out God. We see this around the world and here at home.

Pray for Jimmy Lai. Pray for Christians around the globe persecuted for their faith. Pray for all of us.