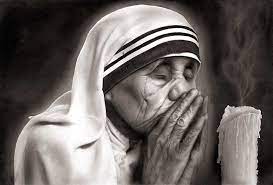 It is a crime in India to “force” a religious conversion. And anybody who becomes Christian would only do so if forced so therefore all conversions are illegal. But clearly it’s not illegal to burn down churches or kill Christians which is what has been going on recently.

Mother Teresa’s charity gets a large portion of their donations from overseas and now that’s illegal for them because the government run by Hindis is saying that the charity forces conversions.

The Guardian: The Indian government has blocked Mother Teresa’s charity from receiving funds from abroad, just days after it faced a police investigation for “hurting religious sentiments of Hindus” amid rising intolerance towards Christians in India.

The Missionaries of Charity, which was started by Mother Teresa in 1950 and runs a network of shelters across India led by nuns to help the poor, was denied the licence to continue to receive funds from abroad, cutting the charity off from vital resources.

The home ministry, which made the decision on Christmas Day, said it had come across “adverse inputs” when considering the application.

The rejection of the application comes less than two weeks after Hindu hardliners accused the charity of carrying out forced conversions of Hindus to Christianity in a home for girls it runs in Vadodara in the state of Gujarat.

Christian devotees pray at a Church to celebrate Christmas in Guwahati, Assam
Jesus statue smashed in spate of attacks on India’s Christian community
Read more
The accusations, which the charity fiercely denies, were that the charity was “luring” poor young Hindu women into becoming Christian by forcing them to read Christian texts and take part in Christian prayer.

“The institution has been involved in activities to hurt the religious sentiments of Hindus intentionally and with bitterness,” a report filed to the police alleged.

“The girls inside the Home for Girls are being lured to adopt Christianity by making them wear the cross around their neck and also placing the Bible on the table of the storeroom used by the girls, in order to compel them to read the Bible … It is an attempted crime to force religious conversion upon the girls.”