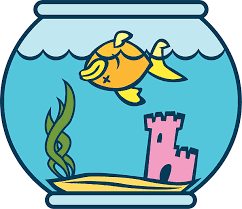 OK. My daughter is home from college. She’s had a goldfish named Kevin for a few months. She won him. Her roommates won fish too but they promptly died within days as fish tend to do. But Kevin survived. And survived.

My daughter came home from college for Christmas. I noticed that the water in the bowl was getting a little…nasty. So I urged her to change the water for poor Kevin. After a few days she did.

Well, it turns out that Kevin didn’t take very well to Philadelphia water. He died. Very shortly after she changed the water. So yeah, it’s kinda my fault because I urged changing the water but we’re not going to focus on that.

What we’re going to focus on is…what now?

Once I saw Kevin was…no longer amongst the living I called her down. She took a look and she was a little upset. Not crazy upset. But it’s a thing.

Now, I’m sure there’s some kind of minor grieving process going on here but we’re about 24 hours in and the fish formerly known as Kevin is still in the bowl on my kitchen counter. I don’t want to rush this but I’m thinking a quick burial at sea via the toilet should be forthcoming, right? But as of yet there don’t seem to be any arrangements being made.

I’m thinking tonight I push this? Maybe just take on the role of the undertaker? I’m thinking I’m a little hesitant to make myself the bad guy here considering I’m the actual bad guy here who suggested changing the water.

I’ll let you know what happens.

Update: We had a little procession and carried the fish formerly known as Kevin into the bathroom while playing some sad song. (I suggested “Beyond the Sea” but nobody listens to me.) We flushed him and then we all stared at the toilet for a moment as he swirled down into nothingness.

Then we got ice cream.