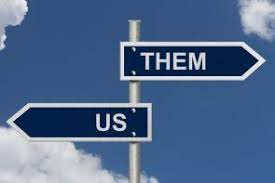 When Christianity is tossed aside. When we play this game of cultural Jenga to its inevitable conclusion we will find ourselves alone in a materialist universe.

When there is just material in a godless universe then it’s just people grabbing to get as much for themselves as they can. How does one do that?

We join gangs. We team up. We maximize our advantage.

Almost half of Democratic voters—48 percent—think the government should be able to fine or imprison individuals “who publicly question the efficacy of the existing COVID-19 vaccines on social media, television, radio, or in online or digital publications.”

This is not the most astonishing finding of a poll just released by Rasmussen. Let’s go through the relevant points: Nearly the same percentage of Democratic voters—47 percent—think the government should be able to put a tracking system, like an ankle monitor or a locked collar, on people who refuse the vaccine. And 45 percent favor putting the unvaccinated in camps. Camps.

The othering has begun. It is advanced. Spread.

The easiest way to gang up is according to certain obvious differences. Race? Money? Education? Geography? Red vs. blue? Vaxxed vs. unvaxxed? Non-believers vs. believers.

There is no us. There is no them. It’s just people seeking to divide in order get their share. And perhaps some of yours too.

These gangs are based on survival. And what do they believe is the greatest threat to them? Christianity. So attacking Christianity will be their focus. It is a good thing for them that at this point in history, Christianity has so few defenders.

When they talk politics, it’s not about taxes, it’s about abortion. It’s about gender. They know who their enemy is. In any struggle that is a great advantage. Most Christians don’t even know there’s a fight.