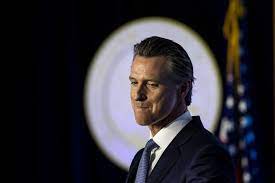 This is Nero fiddling.

After a ravaged Los Angeles rail depot where several thousands of deliveries were torn apart on a daily basis became national news, Governor Gavin Newsom had to pretend to care. Fortunately, pretending to care is what Governor Newsom does best.

Just take a look at this. This is what California has become.

Newsom said, ‘It looked like a third world country, these images, the drone images that were on the nightly news. ” As if he had no responsibility here. As if he were just an onlooker.

Anyway, Newsom said, ‘This is not one-off. This is organized theft. These are organized gangs of people that are coming out,’ Newsom said during a Los Angeles news conference Thursday.

And then it happened. Newsom apologized. But not to the thousands of people who didn’t get their package because California has transformed into a savage hellscape. No. He apologized to the people who robbed the trains. Seriously.

California Governor Gavin Newsom apologized for calling a group of cargo train thieves ‘gangs of people’ because he feared the term was offensive. Instead of gangs, he clarified that the criminals were actually just ‘organized groups.’

“Forgive me for saying “gangs” – that’s not a pejorative,” he said. “They’re organized groups of folks that move from site to site.”

This is how society collapses. It happens when a smiling governor stands among the wreckage of his state and apologizes to the gangs.