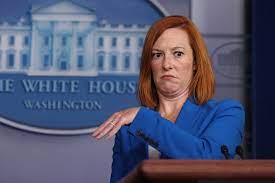 Just so we’re all aware of the rules. Showing up at a school board meeting is threatening and offensive but yelling and screaming outside a Supreme Court justice’s house and threatening their family is approved by the White House.

Got it. These ground rules are difficult to comprehend at times.

Yesterday, the EWTN reporter asked Jen Psaki if she’d heard about a Catholic Church being vandalized by pro-abortion maniacs.

OK, this is just me talking but I’m calling BS. They read about it. They knew about it. But if they say they knew about it then they have to talk about it so they say they hadn’t heard. This sends a message that this doesn’t rise to a certain level of importance. They don’t want to discuss it because then it becomes a story and they have to condemn this in particular. They don’t want leftist violence to be a story. It doesn’t fit their worldview. From their perspective, the Catholic Church is an oppressor, an enemy of the people who they’re seeking to set free.

You ever notice that violence from the left is always random and committed by a lone wolf with no ties to anyone on the left. But even a nasty tweet from someone on the right is considered “violence” because words are now violence and that single act is a sign of a worrying trend of right wing violence.

The ground rules are established. You can not win. Violence towards us will be considered “mostly peaceful.” And the White House will not have heard about it specifically.