She Threw PJP II Book Across the Room. But It Changed Her Life. 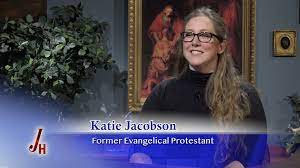 I’ve said it before but I love conversion stories. It’s a guaranteed happy ending, kind of like a Hallmark movie but with God.

Katie Jacobson shares her experience of wandering through a number of Evangelical Protestant denominations before finding a home in the Catholic Church. This woman considered them all. Jehovah’s Witnesses, Mormonism, and a whole bunch of denominations. But she sought out the one true Church. Guess where that led her.

I especially loved the part where she discovered Pope John Paul II and “fell in love” with his writings until he urged Protestants to come home. She threw the book across the room because she’d been soaked in anti-Catholic animosity. But she couldn’t quite shake it.

JonMarc Grodi hosts. It’s almost strange to watch him because he’s so similar to his father with so many similar mannerisms. He does a great job. In fact, both Grodii’s do such a great job is they allow their guest to speak. So many hosts make it about them. They don’t.