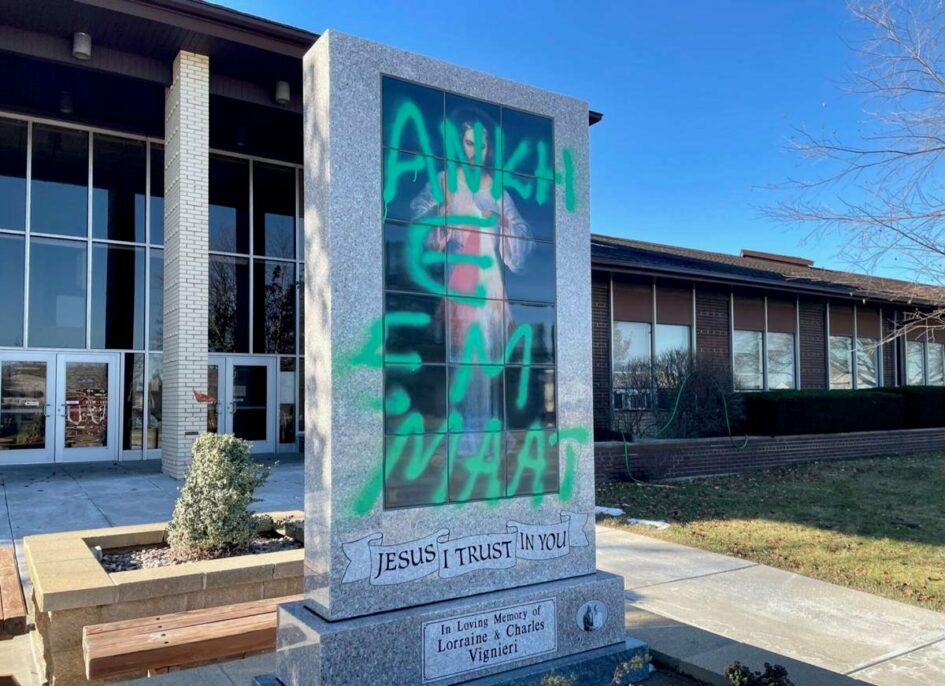 The new normal. Don’t worry. The FBI is on the case.

A member of the church contacted the Kenosha Police soon after the discovery.

“The vandalism at Saint Peter’s consisted of green spray paint graffiti on one of the exterior granite shrines near their entrance to the church,” Kenosha Police Sgt. Jeffrey Galley said in a statement Monday afternoon. “A criminal complaint was made earlier today. It’s unknown if the spray paint can be removed with a remover so the extent of the damaged has not been determined.”

He said there are not yet any suspect leads.

The Rev. Ireneusz Chodakowski said members are upset and such vandalism has never occurred at the church during his 14 years of service there.

Chodakowski said he does not know what the message means and it is not in Latin.

I can help a little bit on that front. The term “ANKH” is some kind of Egyptian reference to eternal life. The word “MAAT” refers to an Egyptian goddess. So clearly, this is pagan.

Paganism is skyrocketing throughout our culture right now. I think at this point there are more Wiccans than Presbyterians. (I actually think that might be true.) As paganism rises, you must know that attacks on Catholic churches will rise.

Christians haven’t done a great job of evangelizing the young. The good news is that Big Atheism lost. They lost bad. Young people have rejected a flat materialistic view of the universe. The bad news is that they haven’t embraced Christianity but paganism and wicca.

Why? We must ask ourselves why.

I think many in the Church have attempted to flatten out Christianity, make it less weird while attempting to match it up alongside a materialistic view of the universe that many in science espouse.

Young people are abandoning the Church because they’ve already rejected the boring dull unwierd view of the universe. People want the mystery. The soul cries out for miracles while many in the Church attempt to explain them away by saying stupid things like “the miracle was the sharing.”

Many in the Church have veered away from talking about the resurrection and the true presence because it doesn’t comport with #science. They want to make Christianity more believable so they attempt to flatten it out.

But the people know that there is more going on in the world. They know there are mysteries. So whthen they turn to paganism and Wiccan practices.

It’s a similar thing when those in the Church argue that they need to modernize the Mass so they bring in guitars and tambourines while the kids think Gregorian chant in their video games is the coolest thing ever.

The Church shouldn’t try to out modern #science. We need to embrace the mystery and the miracles. Allow the incense to fill the Church.

The only thing we have to fear from Big Atheism is becoming them.