Senator and Pastor Raphael Warnock Says Abortions Are What Jesus Would Do. 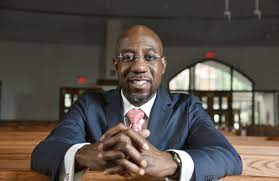 I wouldn’t stand too close to Raphael Warnock anytime soon.

In an interview with MSNBC host Joy Reid on ‘The Reidout’ on Monday, Warnock, who has voted for abortions up to birth, tried to justify killing babies by saying that it’s okay from his standpoint because he is a pastor.
“I get a lot of pushback from people who seem to think that they own the interpretation of the Gospel,” Warnock said. “I have been studying the Scriptures my whole life. I’m committed to the faith. And, as a pastor, I have a profound reverence for life. And, as a pastor and a person of faith, I have a deep respect for choice.”

“If we care about life, black women are dying three to four times the rate of white women in childbirth, as a result of childbirth,” he said. “And so, if you care about life, we ought to find a way and address the obvious bias in our health care system.”

“It’s what Jesus would do,” Reid said.

“I think it’s exactly what Jesus would do,” Warnock agreed.

So, according to his logic, black women are more likely to die during childbirth soooooo….let’s just kill the babies too.

Nowhere does he say how many women suffer complications (even fatal ones) from abortion. No. Ralph Warnock isn’t about that. He’s for abortion and Jesus, doncha’ know.

But the logic doesn’t even make sense. Are these women procuring abortions because they fear they won’t survive pregnancy? Hell no. They are aborting because they’re alone. They’re scared. They don’t feel like they can give enough to the child.

Gee, that sounds like something a pastor could actually speak to. But he doesn’t actually give a darn about pastoring. He’s a politician who uses religious words to pretty up his message of death and control.