Supreme Court Gives up on Finding Leaker Who Endangered Justices. 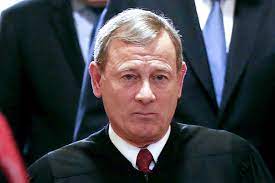 The unprecedented leak of the Dobbs decision endangered the lives of the justices. Most alarmingly you might recall an actual assassin gave himself up on the lawn of one conservative Supreme Court justice.

But Chief Justice Roberts just shrugged and said they couldn’t find the leak and are giving up.

Roberts never even brought in the FBI to investigate (not that I have a whole of faith in them) but he left the investigation to the Marshall of the Supreme Court, a position responsible for mere security over the physical premises of the court. So yeah, essentially a security guard.

What does that tell you?

Roberts didn’t want to discover the leaker. He never did.

So, we’re just ignoring this crime even though ignoring it essentially assures that this will happen again and the lives of justices will once again be put in danger.

This cowardice or complicity could very well cost lives but its more important that this crime be covered up than the integrity of the high court be maintained and the justices and their families protected.