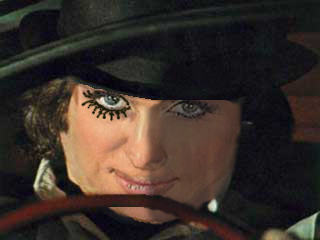 Can Paris Be Rehabilitated?

Paris Hilton has gone to jail because of her out-of-control lifestyle. Drugs, drinking, and driving. Non Stop parties and up until now, never any consequences. When I look at Paris, Britney, and Lindsay I see a female crew that reminds me of the out-of-control gang from “A Clockwork Orange”, although admittedly less violent. What will it take to reform this crew? Paris has said she has found God. I hope so.

Unfortunately, the deck is stacked against Paris. In response to her out of control party lifestyle landing her in jail, her swine of a father plans to hold a $50,000 release bash in Vegas. Yeah, that ought to teach her. I think that Mr. Hilton should be thrown in jail for a while for being such an idiot.

Perhaps, if Paris and her cohorts cannot be reformed by a little jail time, a little psychological torture might do the trick. If not, we should expect to see Paris look like this picture any time now.