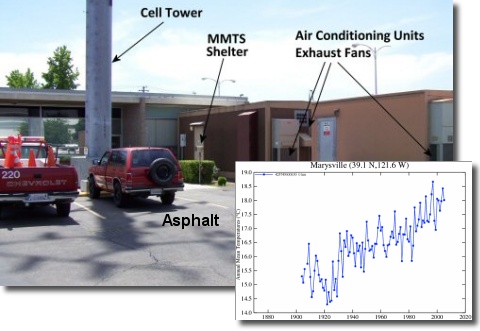 We have all seen the charts that show temperatures rising. Very dramatic…very convincing…very suspect. As it turns out the stations which collect the much trumpeted historical temperature data have histories of their own.

To assure accuracy, stations (essentially older thermometers in little four-legged wooden sheds or digital thermometers mounted on poles) should be 100 feet from buildings, not placed on hot concrete, etc. But meteorologist Anthony Watts of Chico, Calif. has documented (as his website www.surfacestations.org) how this is not always the case. Over time, civilization has encroached on these weather stations with direct impact on the data they collect.

On his website, one can find an examples of well maintained weather station with its corresponding temperature readings which show a net decrease over the past century with temperatures generally steady over the past 60 years. This contrasts with a station which has been encroached upon by buildings, asphalt, air conditioners, and a cell tower. The micro effects of local temperature rise can be dramatically seen in the corresponding temperature chart.
Watt’s is careful to point out that he does not yet have enough evidence to call into question general validity of the NOAA readings, but at least he is asking questions. This is more than many ‘global warming’ advocates are doing these days. Who needs good science when you have consensus on your side?