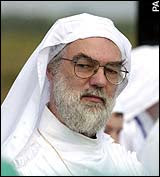 Do you remember the rather forgettable movie Star Trek V?

In that particular incarnation of the science fiction series, we follow the travails of a charismatic religious leader who hijacks his religion and the crew due to a vision of God that only he and a small minority share. Persistently and arrogantly he drags everyone along with him, certain that his particular version of God and religion is the right one. Consistently, his wiser separated brother tries to show him logically the errors of his ways and the falseness of his vision of God. When certain key characters object to the direction he is going, he kidnaps and forces them onward, always certain that his vision will be borne out. When finally he meets his ‘God’ at the end, he turns out to be nothing other than the manifestation of his own arrogance, leading ultimately to his own destruction.

Rowan Williams, Archbishop of Canterbury, and head of the Anglican Communion similarly leads his flock based on a vision of ‘God’ rejected by the majority of Anglicans. His wiser but separated brother, the Catholic Church, has tried to warn him and his co-religionists about the errors of their ways and the falseness of their vision of God. Undaunted, this charismatic religious figure leads his flock to their ultimate demise.

I know what you may be thinking. Trying to compare the tribulations of the Anglican Communion to Star Trek V is quite a stretch. And comparing Rowan Williams to Sybok, please. Oh yeah, take a look at these pictures and tell me I am wrong. Rowan Williams is Sybok. I rest my case.