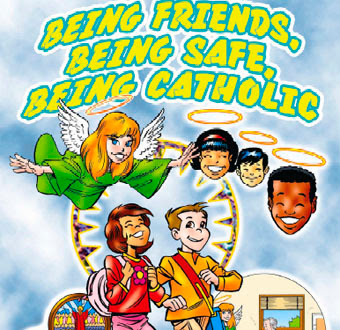 New York’s Roman Catholic Church is trying a novel approach to bring children into the Church – making them scared to death of priests. The diocese is alerting children to the danger of being sexually assaulted by a priest with an abuse-themed coloring book, officials said Tuesday.

“Being Friends, Being Safe, Being Catholic,” was distributed earlier this year to several hundred schools in the New York area as part of the church’s Safe Environment Program, a spokeswoman from the city’s Archdiocese said.

One image in the book features a guardian angel hovering over an altar boy with a priest lurking in the background.

“For safety’s sake, a child and an adult shouldn’t be alone in a closed room together,” the angel counsels. In another, the angel warns of a sexual predator attempting to chat with a child over the Internet.

David Clohessy, head of the Survivors Network of Those Abused by Priests, cautiously welcomed the initiative, but said it did not go far enough.

Yeah. That’s the problem with this. It doesn’t go far enough.