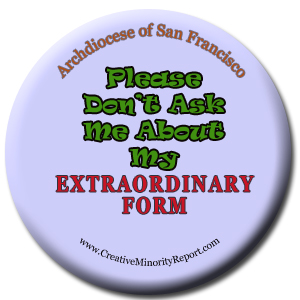 In San Francisco, Archbishop George H. Niederauer, has recently issued his own norms for the celebration of the Extraordinary form of the Roman Rite. This has been the favorite maneuver of those Bishops not favorably disposed toward the classical liturgy.

The Archbishop throws up the usual road blocks to the liturgy. These include the stable group requirement. In SF’s case, the number is set at thirty. He also requires to 400 questions Latin test filled out in triplicate so that priests can be certified. He also warns priests that their will be no public masses without a direct request and his say so. These are all the usual tactics that other bishops have implemented as well.

However, in San Fran, they have come up with a new angle. Try to talk them out of it. If you need to, offer them a Novus Ordo in Latin, anything but the Traditional Latin Mass.

Suggest priests consider “the possibility of celebrating the ordinary form in the Latin language…as an alternative to using the extraordinary form in satisfying the spiritual needs of the faithful who desire a Latin Mass”;

There is no mention in the article whether the tests for Latin and rubrics will be required for any priest wishing to celebrate a Latin Novus Ordo. Somehow, I don’t think there will be.

I cannot help but chuckle that they hope to do the bait and switch. Like used car salesmen, they hope to convince you to take a different model than the one advertised.

“Sure, sure, no problem. You can have the mass that we advertised in the motu proprio, but before you decide let me show you another similar model that you might like more. It has all the Latin of the original but with some happy clappy active participation thrown in for free. Truth be told, if I were choosing a new mass today, I would choose the latinized new mass instead of your father’s old mass. Plus, if you choose the advertised model, you have to fill out lots of paper work, pass some tests, and wait several months before you can have it. If you choose this other model that we have in stock, you can take it home today. Whaddya say? Is it a deal? Good. Just sign right here.”