FOCUS: Hope For the Future 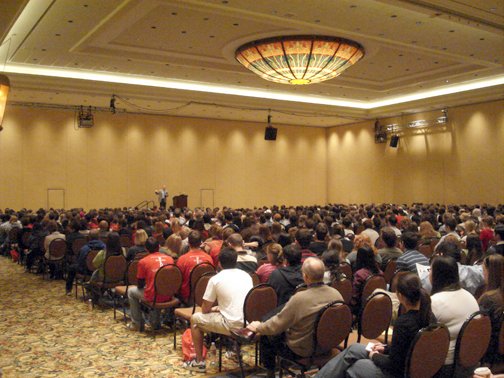 I returned yesterday from the national conference of the Fellowship of Catholic University Students (FOCUS), held outside of Dallas. If you want hope for the future, here it is. Nearly 3,000 college students heard motivating talks by Fr. Benedict Groeschel, Mother Assumpta Long, NFP guru Janet Smith, prominent converts, biblical scholars like Tim Gray (shown here in a breakout session which is only a part of the full attendance), motivational speakers discussing virtue, manhood and womanhood, Christian success stories, lectio divina. Christian music groups and clean comedy troupes performed. This was no musty, church basement event–a genuinely joyful enthusiasm filled the conference center, with students singing their school cheers and waving flags and playing guitars in the hallways after the sessions. Every sort of person was represented there: Sisters of Life, seminarians, young families, jocks, musicians, people with pink hair and people in khaki pants or long skirts. The conference also featured perpetual adoration as well as daily Mass celebrated by people like Bishop Chaput, of Denver, Bishop Finn of Kansas City, and dozens of priests. Saturday night ended with a 3-hour session of Eucharistic adoration attended by over 2000 students on their knees for hours or even prostrate flat on their faces, worshiping their Eucharistic Lord and preparing for confessions heard by dozens of priests for hours on end. FOCUS was founded by Curtis Martin, and it uses teams of motivated recent college graduates as missionaries on college campuses to evangelize students and it really works. Here is the future: a creative minority which is growing fast and changing lives by leading them to the depths and the joy of Catholicism.