Hope for the Future: My Alma Mater 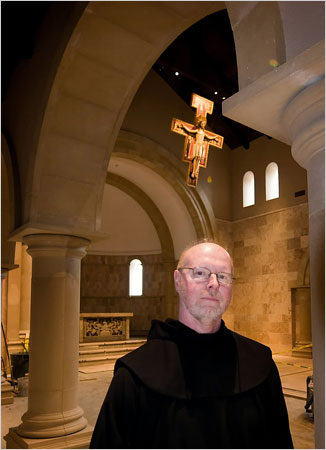 I graduated from St. Anthony’s High School in Huntington, New York some 23 years ago. Two things happened today that make me proud of my alma mater and hopeful for the future of our church.

I have known Brother Gary Cregan since before he was ‘brother’ Gary and was only a lay teacher at St. Anthony’s in the early 80’s. The Gary Cregan I knew then never was one to pull punches. Apparently not much has changed. Says Brother Gary in the New York Times:

“I have a general disgust for Catholic architecture since the 1950s,” he said recently. Dressed in a brown habit belted with rope, he becomes animated — even enthusiastic — as he discusses the high school’s plan to build a new, more traditional chapel.

Brother Gary is now principal of St. Anthony’s High School and is building a $3 million dollar chapel that will be something to behold. The new school chapel is very traditional.

In church architecture, the return to traditionalism is a trend across the country, according to Duncan Stroik, a specialist in the design of Catholic churches.

Mr. Stroik is also a professor at the University of Notre Dame, in the school’s classical architecture and traditional cities program, one of the few of its kind. 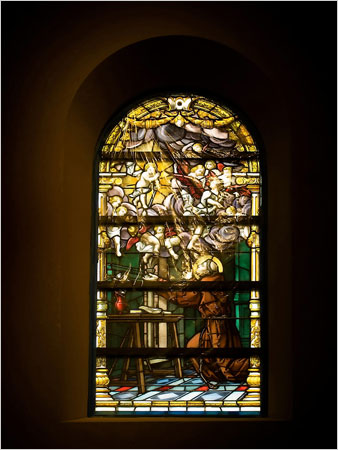 For a high school, he said, the decision to go traditional is unusual. “It’s so interesting that the high school is fairly contemporary, but the chapel is consciously a separate building,” he said. “Even from the outside, you can tell that it’s something different.”

Mr. Stroik explained that many of his clients these days express the desire for a church that lures people, rather than one that simply provides a functional gathering place.

As he put it: “There’s this sense that in walking into a vertical space, whether it’s St. Patrick’s Cathedral or Grand Central station, on the one hand you are in awe of how grand it is, and how small you are. But also there’s a kind of feeling that you are lifted up, you are ennobled.”

While the chapel is very traditional, some of its furnishings are not. Well, at least how the furnishings were obtained.

In the case of the Huntington school’s new chapel, some ennobling accessories were acquired with the help of modern technology. Stepping gingerly through the chapel construction site, Mr. Cregan pointed out his bargain-price purchases on eBay, the Internet auction Web site. These included the confessionals and pews, a 110-year-old arched stained glass window and a 100-year-old statue of St. Anthony.

He is proudest of the bell suspended from the top of the tower — another eBay find, for $4,000. A new one would have cost $20,000, according to John Petrocelli of the J. Petrocelli Construction Company, which is building the chapel.

I hope that the acoustics will be good in the Chapel. Today I was A Traditional Solemn High Mass for the bestowing of Papal honors on Monsignor Pareda attended by Bishop Murphy. I will write more on that later. The Mass was sung by the Gregorian Schola from none other that St. Anthony High School. The snippet below is of the schola rehearsing before Mass. They are lead by Brother Joshua who was at the school when I was there a quarter century ago. He must have been the only 12 year old Franciscan at the time because he looks younger than I do. Anyway, check out this brief and unsteady clip of the Schola.

I have great hope for the future.