Unveiling the Icon: Sanctuary of the Divine Mercy 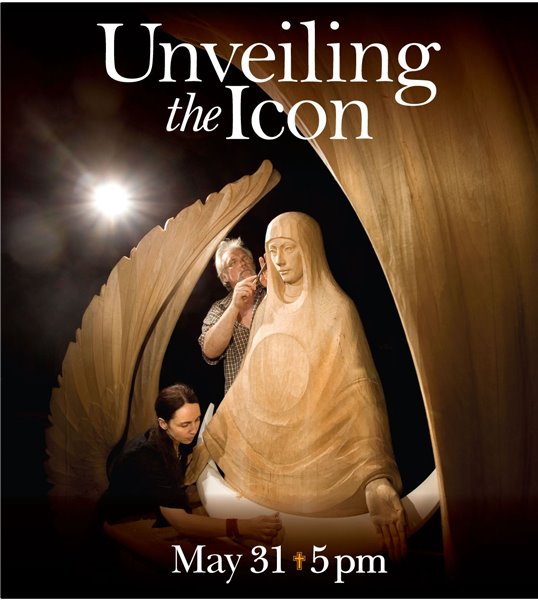 The Sanctuary of the Divine Mercy in Chicago has announced a special event at 5 pm on May 31st: the televised unveiling of the iconic monstrance which will be the centerpiece of the forthcoming Sanctuary of the Divine Mercy, a very unique and beautiful place for prayer currently in its final planning stages. The unveiling will be televised in English, Spanish and Polish on EWTN, with yours truly serving together with Fr. Thomas Loya to provide “color commentary” for the event.
The Sanctuary is the special project and devotion of Fr. Anthony Bus, a Resurrectionist priest and pastor of St. Stanislaus Kostka parish, who, in a mystical experience, literally heard the Virgin Mary ask him to build a sanctuary dedicated to her Son. His inspiring story is chronicled in the hugely successful book, A Mother’s Plea.
The iconic monstrance is shown here in one of its early stages. How it looks now is a carefully guarded secret, though I did get a sneak preview last week with its fullness of color and gold leaf, and it is truly stunning. The monstrance is actually a large, hard-carved wooden sculpture shown here in its architectural setting, (and in true Chicago fashion it has already been described as “the largest monstrance in the world.”) It combines the two adoring angels and the golden Ark drawn from the Holy of Holies in the Temple of Solomon, but then shows it in its Christian fulfillment: the Virgin Mary now appears as the new Ark, and in her “womb” will be Christ as the New Law of Love and Mercy, the Blessed Sacrament for adoration.
The Jewish roots of Christianity are here recognized and admired, but shown in Christian fulfillment. The architectural setting will be one of the most sophisticated uses of the “New Classicism” movement, with every part thought through as a presentation of theological realities recalling the Old Testament time of shadow, the New Testament time of image, and the anticipating the glory of heaven. The unveiling will be followed by a week of 24-hour adoration at St. Stanislaus Church in the actual monstrance. Click here to sign up for slots for adoration.
The Sanctuary of the Divine Mercy is more than just another pious project. It is living proof that the Holy Spirit is at work in the Second Spring of the Church. At its heart is the worship of God and the sanctification of humanity through the Divine Mercy. Its art and architecture will blaze new trails in the recovery of Beauty. It recovers Catholicism’s biblical origins in the old covenant and displays heavenly glory to us. It will, no doubt, become a spiritual “umbilical cord” of God’s Mercy for the world.

sanctuary of the divine mercy, unveiling the icon