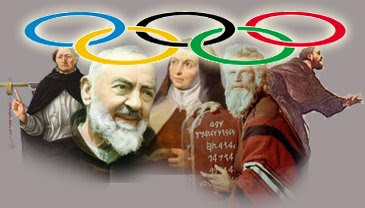 The Vatican has officially been a city-state for decades but many were surprised at the announcement yesterday that the Vatican will be fielding a team for the Olympics.

And many sports officials across the world are crying foul because although the Vatican might be the smallest independent state in the world by both population and area, it expects to sweep the Olympics in several key events by using a team of saints, long dead prophets, and religious figures from both the Old and New Testament to compete this year in the games in Beijing.

The Marathon – Padre Pio has been announced to take part in the Marathon, one of the most renowned sports of the Olympics but many athletes are complaining that Padre Pio’s gift of bilocation will aid greatly in showing up at the finish line.

Said one runner: “Let’s face it. The guy’s not in great shape. He’s old. He’s constantly bleeding but because he can bilocate…I mean that just doesn’t seem fair. I could be miles ahead of him and then…boop…there he is in front of me at the finish line.”

Pio not only guaranteed a win in the Marathon but said if he wanted he could compete in several other races at the same time but his legendary humility prevented him from showing off.

Swimming: Moses (no last name on record) is not known as a proficient swimmer and many believe his un-aerodynamic beard will almost certainly slow him down in the water but the great Old Testament prophet has been signed up to compete in every swimming event and compete with Michael Phelps for the gold in all of them. His secret is that he might just be able to part the Olympic sized swimming pool and simply run across the bottom and break every record which exists to date.

Other swimmers also fear for their safety as they fear ending up in the bleachers when he performs his famous miracle.

Some wondered aloud if it was illegal for his feet to touch the floor of the pool. Moses was quoted as saying he might be inclined to send some frogs and locusts and plagues to anyone daring to question him.

If Moses cannot compete, Peter (the Church’s first Pope) has been assigned to be his alternate. Peter has, in the past, walked on water but some believe walking on salt water may be very different from walking on pool water. They’re hoping the difference might be enough to shake his faith and make him sink. If forced to compete, lifeguards will be standing by.

Equestrian – Despite plans to compete in this event, Saul will not be competing this year in any equestrian events. After a fall and an injury off a horse, he reportedly changed his name and has been acting erratically ever since. And besides, Saint Francis has been marching with the PETA people protesting all of the equestrian events saying he doesn’t like all that stress on the horses so the Vatican thought it best to leave that event unattended.

Weightlifting and Wrestling– Samson is one of the only athletes to compete in separate events. Samson has been granted tremendous strength through the Spirit of the Lord to combat his enemies and perform heroic feats unachievable by ordinary men like wrestling a lion, slaying an entire army with nothing more than a donkey’s jawbone, and tearing down an entire building. Many in China were nervous when Samson seemed to be checking out the architecture of the Olympic stadium. While many competitors have called for the Old Testament hero to be tested for steroids, Samson demanded to know the names of those making accusations against him and then said, “Me and that donkey jawbone will give them what-for.” Nobody has yet admitted to accusing him.

High jump – Saint Joseph of Cupertino and St. Teresa of Avila are competing in the men’s and women’s high jump respectively. Both were prone to miraculous levitation, a grace many believe will come in handy in breaking every high jump record on the books. Competitors were already dismayed when both declined airline tickets to Beijing and flew over themselves. Many believe that because St. Teresa had been known to experience visions that she may already know that she’s going to win her events but when asked she just smiled and went to Church to pray.