Ain’t That America, Little Pink Condoms For You and Me 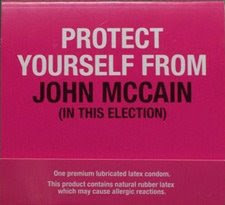 The wonderful darlings over at Planned Parenthood are handing out more than 700 pounds of condoms encased in a pink matchbook that reads: “Protect Yourself From John McCain (In This Election).” One question: 700 pounds? Is there nothing else to do in Denver? For goodness sakes, take in a ballgame.

The back reads, “10 Things Everyone Should Know About John McCain,” and includes one of 10 “frightening” facts about McCain’s record on reproductive rights.
For example, No. 10: “Has voted against women’s reproductive rights and privacy 125 times in his 25 years in Washington, D.C.” No. 9: “Said he was ‘stumped’ when asked whether contraceptives help stop the spread of HIV.”

That makes sense. These guys have been dumping condoms on Africa for years and still the HIV rate rises. But they prefer to live in a mythical world where casual sex means consequence-free sex. In Uganda, the HIV prevalence rate dropped from 15% in 1991 to just over 5% in 2001. This was mainly due to behavioral changes. In fact, by the mid-1990’s, 95% of Ugandan adults said they had only one partner or none at all.

And one final thought. If two Democrats in Denver who don’t really like each other all that much decide to hop into bed with each other and the condom gets taken out, is that really the time they want to start talking politics? Do they really want to be talking about John McCain at that moment. Kind of a mood spoiler, isn’t it? Hey, maybe that’s a good thing after all. And besides they’d have to decide which one of them gets to wear it.