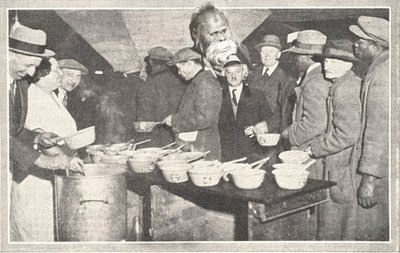 The two Bigfoot researchers who claimed to have captured Bigfoot in a freezer, are now claiming to have discovered a real live “Recession” right here in America.

“It was the scariest thing I’ve ever seen,” said one Bigfoot researcher. “It looked like darkness and it reeked of joblessness. And it was standing right in front of us howling and gnashing its teeth and leaving a giant dustbowl in its wake.”

The two are planning to return to the woods to capture the mythical “Recession” and place it in a freezer.

Many economists and journalists who are typically skeptical of unsubstantiated claims of inebriated Southerners, seem to be accepting their story as fact. And even though recent evidence indicates that no recession can likely be found in America today, journalists are all reporting that a Recession has been found. In fact, the second-quarter Gross Domestic Product (GDP) growth was revised sharply upward to 3.3% from the late July’s advance estimate of 1.9%. But reporters are printing as fact that the recession is alive and well in American despite having little or no evidence of it. Journalists are searching out economists who claim to have encountered the Recession and are willing to tell their story.

In coming weeks, a group of economists are planning on heading out into the woods overnight to see if they too can catch sight of The Recession. Some skeptics believe that no matter what happens on their journey, they’re going to come back with some kind of anecdotal evidence that The Recession exists.

A little known fact among Recession hunters is that Presidential nominee Barack Obama once claimed to spot the Recession. “As most experts know, our economy is in a recession,” said Obama. But Obama failed to offer any evidence that the Recession actually existed. This should not be a surprise as Democrat Presidential candidates often see things that don’t exist. In 1992, Bill Clinton said he spotted “the worst economy in 50 years.” Similarly, Dennis Kucinich said he saw a UFO and Jimmy Carter claimed to be attacked by a giant rabbit.