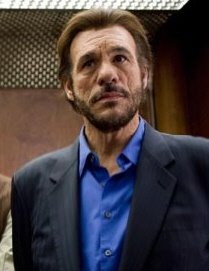 I know that we have been focused on politics lately on CMR. Yes, this is still a Catholic blog. I say this because we have received a few complaints this past week for our uber focus on the US presidential election. Our apologies, but as Amy says this topic is sucking up all the blogxygen these days, so why fight it?

Did you see the introductory biographical video of John McCain last night?

Remember, stay with me. I bring this up because I want to talk about not the man in the video, but rather the voice in the video. Did you notice it? If so, did you recognize it? I doubt it. The voice behind the video, and actually for a number of RNC and John McCain commercials, is character actor Robert Davi. Don’t recognize his name? I am sure you will recognize his face.

He has been a working Hollywood actor for thirty years. He is probably most well known for his role on NBC Profiler and as a Bond Villain in License to Kill.

What you probably don’t know about Robert Davi is that he is a vocal pro-life advocate in Hollywood. In 2005 he recorded a radio spot in support of California Proposition 73, the pro-life proposition that would have required that a physician notify in writing a parent or guardian at least 48 hours before performing an abortion on a minor girl.

More recently, Davi is set to co-star in David Zucker’s Michael Moore spoof, An American Carol along with just about every conservative in Hollywood. Now he is doing voice-over work for John McCain.

I was excited to hear his voice in the bio video last night. Why am I excited? Well, Robert Davi is home team for me. He actually grew up in the same parish as me, although he is somewhat older. My Father, coached him in football way back and my Mother has followed his career and rooted for him since he was just starting out always letting us know when he would be in something going all the way back to 1979 and the Legend of the Golden Gun.

It is gratifying to see that a man who has had so much success as an actor, still remembers the little people. Of course, the little people are actually the littlest people. So to Robert Davi I say congratulations on all your success and thank you for defending the unborn in an industry where that does not make you very popular.