Sometimes Something So Right Occurs… 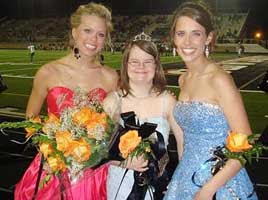 Sometimes something so right occurs and it surprises you. I think we forget sometimes how capable we all are of good. This story from the Dallas Morning News is quite simply beautiful:

Never has the selection of a homecoming queen sent so many tears falling so freely. Here it is:

Kristin Pass, an 18-year-old senior with Down syndrome, became Aledo High School’s homecoming queen Friday to a joyous standing ovation and the flutter of a thousand tissues on a remarkable night for an amazing young woman.

Her grandfather, Dr. David Campbell of Corsicana, escorted her onto the field and gave her a quick kiss on the cheek as Kristin joined eight other young women in the Homecoming Court to await the results of the vote, cast by the 360-plus members of Aledo High’s senior class.

“Oh my gosh! I was sitting in the student section and everyone stood up, crying and cheering for Kristin,” said longtime friend and fellow senior Meaghan Geary, 17, who first met Kristin in the third grade. “It was great!”

Carolyn Pass stood at the edge of the football field, taking pictures of her daughter and friends’ daughters in the court, when the stadium erupted.

“It’s just something you can’t even imagine,” she said. “And afterward, everyone was just running down to her, congratulating her. And the other girls in the court, they’re all just beautiful girls, inside and out.”

How great is that story. For this to occur, with the backdrop of an abortion rate of 90 percent for Down’s Syndrome babies is counter-cultural and beautiful. I know many people fret and worry over “the next generation.” Sometimes I think that the next one might be a far sight better than the ones preceding them.

These young men and women saw past her Downs Syndrome and saw a girl who loved others and accepted them for who they were. She did the unthinkable in high school- she looked past how cool someone was. Her mother said, “Kristin has a lot of friends – she likes everyone. It doesn’t matter if you’re tall or short, pretty, not pretty, smart, not smart – she likes everybody. She has great friends. And Aledo is a great community.”

We can look at this story and its implications for our society but most importantly Kristin was so thrilled that she took her crown to bed with her.