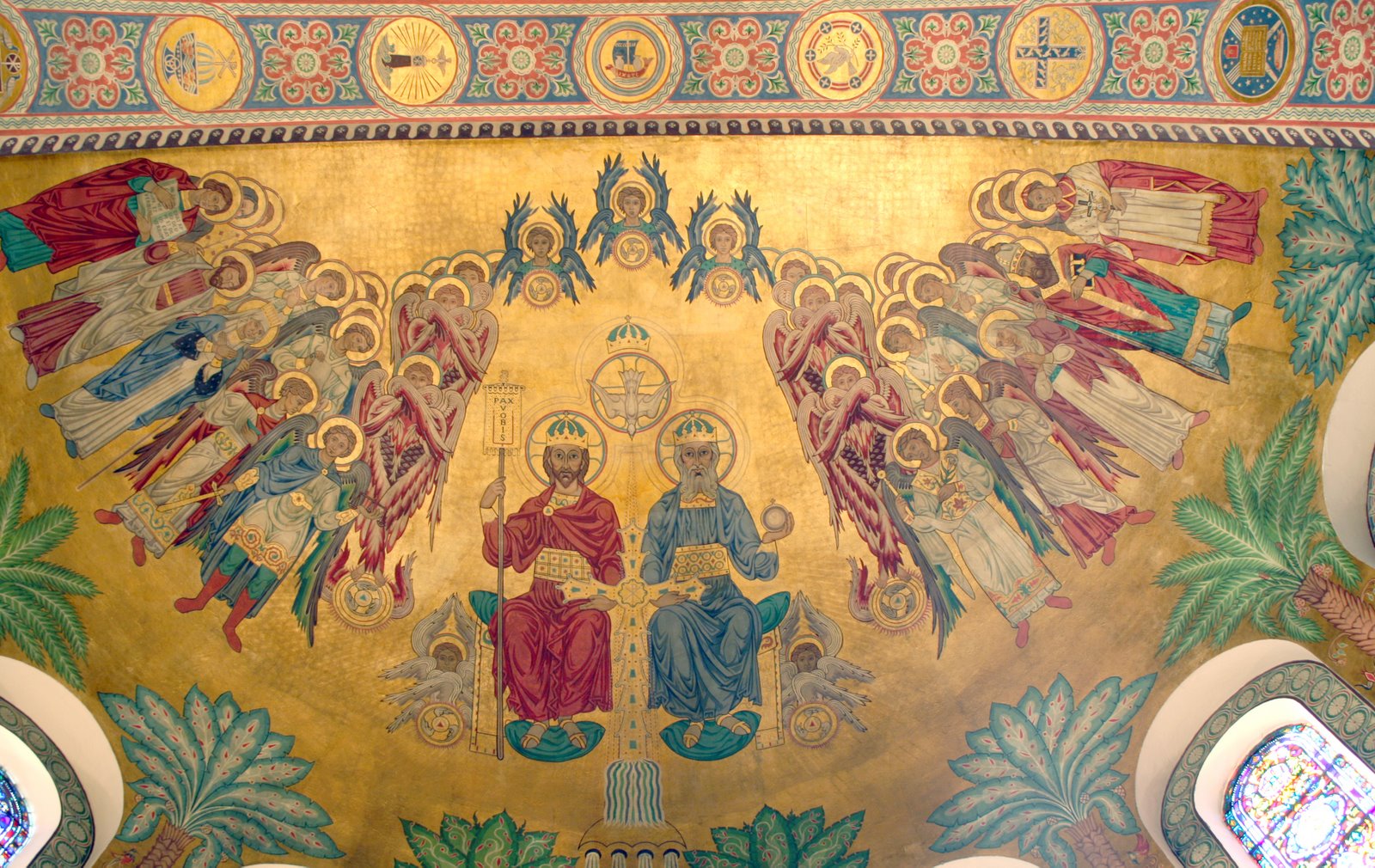 The has been much discussion in recent years about the nature of imagery in a church. Many people think that if you put a Mary on one side and Joseph on the other, a church has a compete set of imagery. However, I’d like to present a thought from an upcoming book I have just finished which discusses a type of representation much forgotten: the liturgical image which presents the liturgy itself. The example shown here is from the apse ceiling of St. Monica-St George Church in Cincinnati, designed by architect Edward Schulte. (click for larger image).

Just as liturgical music, properly speaking, uses the texts of the liturgy (the Kyrie, the Gloria, the Creed, etc), liturgical imagery shows the activity of the liturgy itself. Typically, the parts of the liturgy represented in imagery are those which are not otherwise visible, notably its cosmic and heavenly dimensions. Liturgical art reveals the nature of heaven itself, and is intensely theocentric, revealing the glory of the heavenly realm and shows the heavenly beings filled with divine life. All is radiant, orderly and restored. The expressions of these heavenly beings are not focused on the emotional and personal agonies of their earthly life, but completely transfixed by the glory of God. Their gaze is fixed on God and they act as one body praising and contemplating the Lord. The setting, typically, is the heavenly Jerusalem described in the Book of Revelation.

The apse mural of the Cincinnati Church of St. Monica-St. George shows liturgical art on a grand scale. The Trinity is central, and the beings in the mural have their gaze directed to God, with the only exceptions being those saints whose role it is to make eye contact with the earthly worshippers and direct their gaze to God. Here the angels and saints sing their constant praise to God in a paradise symbolized by the palm trees and colorful birds. The water of grace flows from the cross supported by the Father and the Son on their thrones, and then flows down to the world. This image is neither merely historical nor devotional, even though it has some areas of overlap with these two categories. Here the heavenly and cosmic liturgy are made visible, so that as the documents of Vatican II exhorted us, the earthly worshipper may more fully, actively, consciously and fruitfully participate “in the earthly liturgy” where “we take part in a foretaste of that heavenly liturgy which is celebrated in the holy city of Jerusalem toward which we journey as pilgrims, where Christ is sitting at the right hand of God… we sing a hymn to the Lord’s glory with all the warriors of the heavenly army…” (SC, 8).

The book this little excerpt comes from is tentatively titled Church Architecture and the Spirit of the Liturgy: Shadow, Image and Reality, published by Hillenbrand Books in Chicago. It should be released in June or July of 2009.

D Mac, also known as Denis McNamara, is a faculty member of the Liturgical Institute in Mundelein, IL (www.liturgicalinstitute.org.)