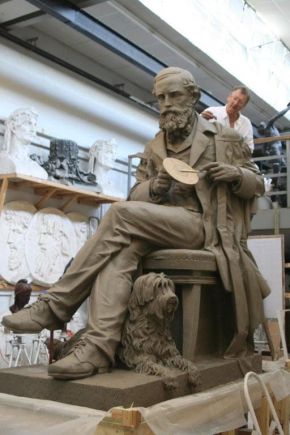 Readers may remember the post on Scottish sculptor Alexander Stoddart posted on CMR some time back. Stoddart has been bravely wading upstream against the Modernist art establishment for decades, giving the world a kind of classical art which rises as high as any the world has seen. News reports tell how as an art student in the 1970s, bathroom graffiti in his university called him a “fascist” because he chose to use figurative art. Well, the times have changed. Queen Elizabeth II has officially named him “Her Majesty’s Sculptor in Ordinary in Scotland.” Beauty is back, baby, and the Queen says so.

There are a lot of “neo-” artists out there, and even in the height of the Modernist stranglehold, there were portrait painters of the predictable realist type who would take a studio photograph of your kids and translate it into oil paint. But Stoddart is a different and better sort of artist who has addressed the cultural claims of the Zeitgeist head on and taken what classical painter Leonard Porter calls the “dangerous path”; he sincerely presented classical sculpture as something valuable and worth doing because it was good in its own right. No “ironic” references to history or Post-Modern shattering of the image. In the quality and public nature of his work he said to the pointy-headed, navel-gazing art world of arcane theories: “Guess what? Tradition is back on its own terms of beauty, meaning, and quality.” Of course, most sane people rejoice in this fact. But when the Queen approves, this art is now out of the shadows and taking the Modernist establishment full on. And the evidential power of Stoddart’s ability and intelligence carried it through. Where a lesser artist may have given ammunition to the critics by producing tired, re-animated copies, Stoddart’s vibrancy of form and depth of meaning have made the Good-ness of this return to tradition outweigh the claims of those who clamor for the “new.”
What we are talking about here is not a simple return to the traditional technique alone, some sort of empty-headed formalism. Stoddart is also a painter, and he recently finished a portrait of former Lord Provost of Glasgow, Elizabeth Cameron, shown here. I have had the privilege of corresponding with Stoddart by e-mail for several years, and he sent me this description of the painting:
She is a very cultured and clever person, so my picture of her is full of sophisticated symbolism… I have shown this lady seated in a floral bower adjacent to a parched wilderness. A huge rock rises with an architectural fantasy built upon it, and a great cleft leading up to this citadel. She has removed her glasses(!) The sky above her declines to a festering red in the distance and her lap bears the baubles of civic authority (the chain of office) in a gesture of terrible renunciation. The picture has above all a kind of air of deep sickness about it; the whole thing is a meditation on Parsifal, both in the Wagnerian reading of the story and in Elliot’s references in The Waste Land. This must be the very first time in world history that a local mayor has been represented in terms so close to the role of Kundry! The title cartouche has a head of Parsifal on one side, and of Gurnemanz on the other. “You see, my son, here (on the approach to Montsalvat) time turns to space.”

Yup. This is a sophisticated piece of art by a sophisticated man. Kundry, by the way, is the female lead in Wagner’s opera Parsifal, itself based on a medieval legend about an Arthurian knight Percival and his quest for the Holy Grail. Montsalvat is the mythic faraway land which in legend is the home of the temple housing the same Holy Grail. Gurnemanz is Percival’s mentor who instructs him in becoming a knight of intelligence and sophistication.

CMR readers might be especially interested in Stoddart’s recent work in Catholic liturgical sculpture. The Saint Rita of Cascia and the Annunciation shown here show us sculpture integrated into the architecture itself, a decidely rare thing these days. In fact, this may be the first time in many decades that traditional artist and traditional architect have been commissioned to work together in an ecclesiastical building. How superior this is to the congregation which hires the local architect for its church then fills it full of catalogue-ordered art. Stoddart is currently working on a full set of Station of the Cross for this chapel, which is the first time in a long time that an artist of his caliber will offer the world a fresh look at that devotion and its art.
So many congratulations to Alexander Stoddart, and a big thank you to the Queen.
If you are interested in learning more about art and architecture and its relation to the sacred liturgy, visit www.liturgicalinstitute.org.