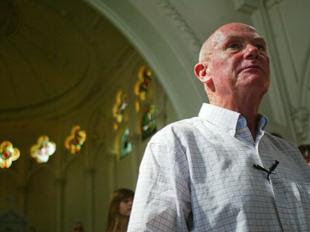 You might remember Father Peter Kennedy who was pulled from his Australian parish but refused to leave because he’s too busy blessing homosexual couples, allowing women to preach, and selling books that questioned the divinity of Jesus.

You might also remember that the UFO cult, the Raelians, rallied to his aid. And you likely remember that he compared himself to Jesus Christ because He too did unorthodox things and was persecuted.

Well, you’ll definitely remember this. The new priest who was supposed to take over and say Mass Sunday had to cancel. Why? Because a bomb threat was called into the Archbishop so the new priest stayed away for fear that his presence would incite violence.

The Australian reports Fr Kennedy will this week continue his fight against the Brisbane diocese in the civil courts unless he is reinstated, after he rejected mediation talks and conducted Sunday Mass for more than 1,500 parishioners at St Mary’s church…

Yesterday’s hour long service was a celebration in defiance, with Fr Kennedy leading the Mass in prayer and hymns, including the protest song We Shall Not be Moved, before imploring Archbishop Bathersby to visit the church.

“It is sad he is not here today because if he was here, he couldn’t possibly move against this community,” Father Kennedy told the service. “We are a Vatican II community – at least, we try to be.”

I personally missed the part about bombs in Humanae Vitae but I guess I didn’t read it as carefully as Fr. Kennedy.

Archbishop Bathersby had incredibly already agreed to an independent mediator which strikes me as more than a little odd but incredibly charitable.

But Fr Kennedy would have none of it, saying any mediation must include the church community -you know, the ones that called in a bomb threat. He said, “If the archbishop wants to mediate, he has to mediate with the community…He has unjustly sacked me and in sacking me he has sacked the community.”

I fear this thing might get uglier before it gets better. Pray for a peaceful resolution.