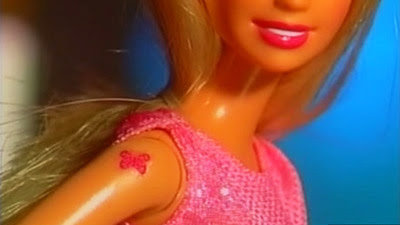 If you wanted one more sign we’re spiraling down the cultural toilet, here it is: Tattoo Barbie.

The new “Totally Stylin’ Tattoos Barbie” comes with a set of body art stickers to be placed anywhere on her body.

The set also comes with a tattoo gun so kids can stamp designs on themselves.

Manufacturer Mattel says the tattoos for children are temporary and wash off.

But some parents believe the toy is not appropriate for young children and would not buy the doll.

Has Mattel lost its mind? CMR can only extrapolate what’s coming next:

2010 – Tramp stamp Barbie? Comes with free contraception, a “Free Clinic” doctor’s office where Barbie can get her pretend gonorrhea shot from an inflatable hypodermic needle. Recommended for children ages 3 and up.

2011 – Correctional Facility Barbie. With digestible pouch for smuggling drug contraband. Shank not included.
2012 – Daytime Hooker Barbie – (Also known as Bratz) Pimp not included. Pull her string and she says, “That’ll cost ya’ extra, honey” and “Not on the lips baby.”