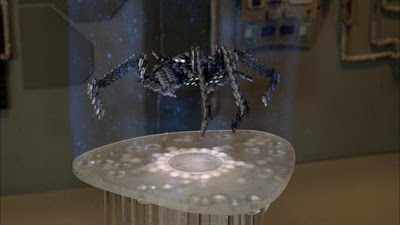 I know that you may be thinking that we are Stargate SG-1 geeks but you would be wrong. Well, not entirely wrong. Anyway. Replicators. Add this to the “Doesn’t anyone think this might not end well?” files.

DVICE reports: Researchers at Cornell University in New York have created robotic cubes that can create copies of themselves in under three minutes which, surprisingly, the scientists purport are simple machines. Self-replicating robots are simple? That’s because that’s all the cubes do — at the moment. They could easily be outfitted with tools for specific tasks, the researchers say. The application for a machine that could reconstruct a copy of itself — reproduce, if you will — or repair itself with limited materials are nearly endless.

Self Replicating machines. Don’t worry, they say, they are tiny and we can control them. Uh huh. Until they turn into…

This monstrosity is nicknamed the Big Dog! Wait until these things grow laser beams and then start self replicating! Not good folks.

According to the NY Times:

A 93-year-old Japanese man has become the first person certified as a survivor of both atomic bombings by the United States, officials said Tuesday.

The survivor, Tsutomu Yamaguchi, had already been a certified hibakusha, or radiation survivor, of the bombing on Aug. 9, 1945, in Nagasaki, but he has now been confirmed as surviving the attack on Hiroshima three days earlier, in which he suffered serious burns to his upper body.

And he didn’t even become a superhero. I mean he didn’t even get like any useless super-powers like the ability to see through wicker or anything. You know, I’m starting to think radiation has nothing to do with superpowers at all. Darn it. Note to CMR Labs: All funding cut off. Must start from scratch.

I don’t know about you but when the headmaster at a four hundred year old school is denying there are vampires on campus, it is time to get worried.

There are no vampires at Boston Latin School, says headmaster Lynne Moone Teta.Seriously.Students at the school, which was founded in 1635, began e-mailing news organizations Wednesday night with the strange story of vampires roaming the halls.

Not to worry though , Police denied reports that anyone at the school was bitten. Yet.

Ht to Jim and Helen! (thanks)

Doomed! So says the US National Academy of Sciences. Take a look at our future:

IT IS midnight on 22 September 2012 and the skies above Manhattan are filled with a flickering curtain of colourful light. Few New Yorkers have seen the aurora this far south but their fascination is short-lived. Within a few seconds, electric bulbs dim and flicker, then become unusually bright for a fleeting moment. Then all the lights in the state go out. Within 90 seconds, the entire eastern half of the US is without power.

A year later and millions of Americans are dead and the nation’s infrastructure lies in tatters. The World Bank declares America a developing nation. Europe, Scandinavia, China and Japan are also struggling to recover from the same fateful event – a violent storm, 150 million kilometres away on the surface of the sun.

This one speaks for itself.

BRUSSELS, march 24, 2009 (LifeSiteNews.com) – A proposed new directive from the European Commission (EC) will drastically restrict the use of animals in laboratory testing, and certain toxicology tests on animals will be permitted only after alternative methods, including research on tissue taken from human embryos, has proved fruitless, reports the Catholic Herald.

In its coverage of the issue, the Herald quotes a report accompanying the EC directive that says, “The establishment of human embryonic stem cells in 1998 raised hopes in many research areas, including the development of alternatives to animal experiments.” The report says that human embryonic research is a “powerful alternative to animal tests.”

Kill the people to save the animals. You can almost hear the asteroid careening toward Earth, no?

No, we didn’t make that title up. In the not too distant future when radioactive fallout from the Obama wars has killed all the humans and mutated all the bunnies, the cycle of violence starts all over.