It’s Not Mexican and It’s Not Swine 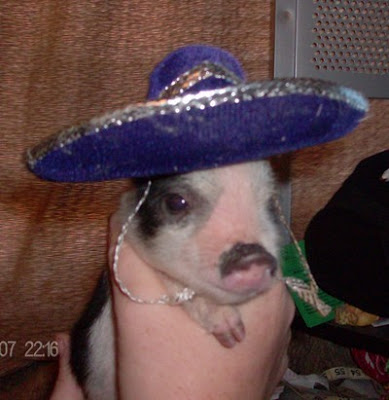 Might political correctness have fatal consequences when it comes to swine flu?

Whether or not it does, there’s no question that political correctness is playing a role in every step of how the government is treating this disease which Professor Neil Ferguson of the World Health Organization now says, “Clearly we are on track for a pandemic in the coming months.”

Let’s just start with the nomenclature battle over this disease. I mean, what happened to the “Mexican Swine Flu?” Has it disappeared? Nah. Just a name change. It’s now like the rock star “Prince” in that it now goes by “H1N1, the disease formerly known as Mexican Swine Flu.”

If you now type in “Mexican Swine Flu” into Google News you get about 20,000 matches (mostly from overseas publication) but if you type in “H1N1” you get over 50,000 from the mainstream media.

So while regular folks worry about this new deadly flu, rest assured that governments across the globe along with the media are worrying about what politically correct name to give the disease? And President Obama is neck deep in the nomenclature wars. And you just know that when Obama renames something, the media follows suit.

First, what happened to the “swine” aspect of “Mexican Swine Flu”?

In the Oval Office last night as Health and Human Service Secretary Kathleen Sebelius was sworn in, President Obama said, “we wanted to swear her in right away because we’ve got a significant public health challenge that requires her immediate attention, and that is the H1N1 flu outbreak.”

Well, yes. That’s the virus subtype the world is dealing with here.

On Sunday, the White House held a “press briefing on swine influenza.”

On Monday, in his remarks before the National Academy of Sciences, President Obama used the unscientific name, referring to the virus as “swine flu.”

As has been noted by others, China, Kazakhstan, the Philippines, Thailand, Ukraine, and the United Arab Emirates have all banned meat and pork products from some parts of the US, according to the office of US Trade Representative Ron Kirk.

The World Health Organization reiterated that one cannot contract the virus by eating pork, and pointed out that no pig had been found yet with this particular virus.

Representatives of certain agricultural industries made their displeasure known to the Obama administration, especially Agriculture Secretary Tom Vilsack, who said during a briefing on Tuesday that “there are a lot of hardworking families whose livelihood depends on us conveying this message of safety…and we want to reinforce the fact that we’re doing everything we possibly can to make sure that our hog industry is sound and safe and to make sure that consumers in this country and around the world know that American products are safe.”

(Also it turns out that Egypt is now slaughtering all the pigs in the country for fear of the Swine Flu. Plus Muslims aren’t huge fans of pigs anyway so some of them might just be using it as an excuse.)

But Obama and the White House are dumping the “swine” word because it’s bad for the pig business. OK. Fair enough. But what about the “Mexican” part? While some media in other countries are still calling it “Mexican Swine Flu” no mainstream media in America is still using that term. Why not?

Political correctness? Does “Mexican Swine Flu” sound racist? I think that’s the worry. Obama may be pushing “H1N1” as a friendly gesture to Mexico. You’ve got to think that Obama would be grateful that the Mexican association with this disease is lost forever as his administration is seeking immigration reform as early as this year. And let’s not forget when this disease first broke out, Obama refused to tighten border security. In fact, he’s still against it.

Tuesday, Homeland Security Secretary Janet Napolitano said…her agency is resisting calls from Capitol Hill to screen inbound air travelers from Mexico and those crossing at border checkpoints…Our focus is not on closing the border or conducting exit screening,” she said. “It is on mitigation.”

Just to make you feel safe U.S. customs agents are now authorized to conduct “passive screening” of travelers entering the U.S. from Mexico which essentially means that if you’re coming in from Mexico by land or plane they’ll ask you if you’re feeling alright. I’m serious. That’s what they’re doing.

Now she’s recanting that term “passive security” but not changing the actual policy. Another case where the White House seems to believe that nomenclature trumps actual…action.

But nothing at all is being said about the dangers of illegal immigrants crossing the borders. No matter what you think about dealing with illegal immigration, undocumented immigrants are entering this country all the time. Shouldn’t we be…I don’t know…looking into stopping that while we’re at risk of a pandemic. Or maybe we could even start just asking them how they’re feeling after they swim across the Rio Grande.

I think it should be asked how many American deaths is it worth to the White House that America is not called a racist? Couldn’t we just tighten security for a while and then send Obama over to Mexico next year to apologize. He seems to like doing that.

Mexico City is in complete lockdown. Is the Mexico City government racist against Mexicans too?

Ironically, Obama who’s “monitoring the situation” said this morning that schools should consider closing if the spread of the swine flu virus worsens.

So schools should close but we shouldn’t tighten border security? Huh?