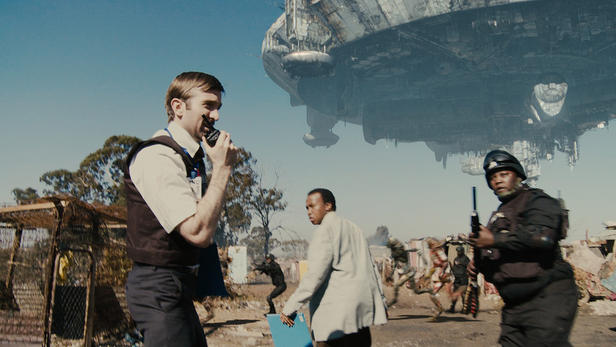 As most people know, the best science fiction isn’t really about the science or the fiction. Great science fiction uses these to tell a story, a human story. The Time Machine, The Day the Earth Stood Still (Original), and even the more recent Minority Report all try to tell us something about ourselves.

District 9 directed by Neill Blomkamp and produced by Peter Jackson is really really good science fiction. Ostensibly District 9 is about the plight of a large group of aliens who have become stranded on Earth in Johannesburg, South Africa. Marooned for twenty years and confined to slums, the locals are fed up with their presence. The decision is made to relocate the 1.8 million aliens, derisively called “prawns” for the appearance and designation as bottom feeders, to a camp some 200 kilometers away from the city. Our protagonist Wikus van der Merwe works for MNU, a soulless multinational corporate behemoth, and is charged with the eviction and relocation of the 1.8 million “prawns.”

In fact, what District 9 is really about is that when a particular group has been sufficiently dehumanized, being a cog in the machine of evil is rather easy. Of course, most of those cogs do not realize that they are participating in a massive and grave evil. The aliens are forced to live in deplorable garbage ridden slums infested with many predators of the human kind. Nigerians who terrorize and scam them, a public which scorns them, and a corporation frustrated by its inability to exploit them. The aliens, you see, have very advanced weaponry but it can only be used by the aliens themselves. Since they are of little use to anyone, MNU and our protagonist laugh as they abort dozens of growing eggs. Later when the MNU and its military component are annoyed by a small child alien one of the soldiers makes as if to shoot him only to be stopped by Wikus saying “No you can’t shoot him now, he is too big. It is against the law. That’s why you have to abort them”

Wikus (brilliantly portrayed by newcomer Sharlto Copley) is an ambitious bureaucrat who goes about his job happily evicting the aliens to what amounts to a concentration camp. However, a mishap along the way begins to transform him into something else. This something else makes him a target of exploitation (and murder) by MNU and the Nigerian thugs who plague the camps. In desperation he must turn to an alien for help. It is through this journey that he realizes the “humanity” of the aliens and ultimately his own humanity as well.

Obviously, being set in South Africa, the parallels to apartheid are clear. But that is much too simple an understanding. It goes beyond that and helps us to understand how simple evil really is when any group is sufficiently dehumanized and people are just doing their jobs. District 9 does all this while telling a rocking good and often humorous story.

District 9, while very violent and with pervasive foul language, is one of the best science fiction films I have seen and most likely one of the best movies of the year.