Ad: 50% Off Abortion if You Show Student ID 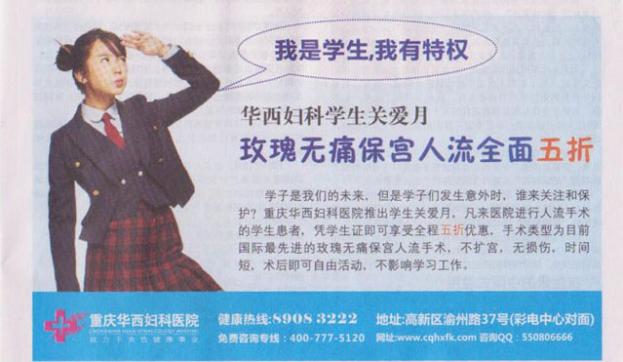 The advertisement (above) reads:

Students are our future, but when something happens to them, who will help and protect them? Chongqing Huaxi Women’s Hospital has started Students Care Month, where those students who come to get an abortion can get 50% off if they show their student ids. Abortion surgeries are the most advanced in the world, won’t stretch (your womb), won’t hurt, it’s quick, and you can do what you want afterward, it won’t affect your studies or your work.

Now, I know many people have registered their outrage over this ad and many are saying that it’s China and that could never happen here. But the truth is that America puts essentially no limits on abortion. And we have a President who’s stated his desire to do away with even minor limitations such as state parental consent laws. And even where we do have parental consent laws, Lila Rose has show many times that that Planned Parenthood regularly ignores the law. And even when state authorities see the violation on video they routinely ignore it (with some exceptions)

Here’s the thing -once you devalue the fetus completely you can’t argue that abortion is wrong. America’s liberal abortion laws aren’t that much different from China. This is a crude advertisement crudely. But is that really where the line is drawn? Is the argument that we want to make really abortion’s fine but just don’t advertise the death of a baby in a crude fashion? Is the 50% off that much much more offensive than Planned Parenthood offering gift cards for abortion for Christmas.

Gift certificates are good gifts when you aren’t sure what to buy that special woman in your life who puts everyone else first:

“Why not buy a loved one a gift this holiday season that they really need,” [Planned Parenthood of Indiana president and CEO Betty] Cockrum says in a press release LifeNews.com obtained. “The gift certificates are also a wonderful idea for that person in your life who puts everyone else first.”

“Please join Planned Parenthood of Indiana and give the gift of health this holiday season,” she adds.

The Chinese ad is offensive because it doesn’t hide what pro-aborts really think of abortion. To them, it’s merely a business arrangement.

For so long we’ve heard from our legislators that they’re personally against abortion and they offer lip service to abortion being tragic but sometimes necessary. They purse their lips and stare off into middle distance because it looks thoughtful to the cameras.

This ad simply removes that mask. It tears the facade off. This ad is disturbing because it makes people confront the true nature of the abortion industry. It’s about money. Lots of it. And this ad is offensive to some because it doesn’t obfuscate.

I want more ads like this one. At least they’re honest.