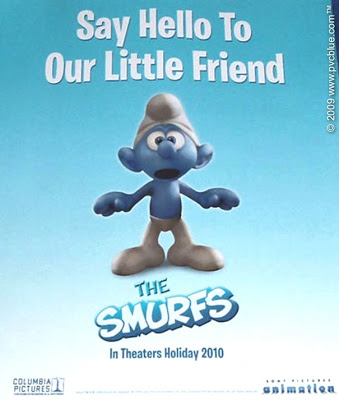 I couldn’t imagine worse news. Can’t these people just leave something in my childhood unmolested by their greedy greasy capitalist palms? No. They just had to mine our childhoods for profit once again. It was bad enough when they made a movie of the Dukes of Hazzard (and they didn’t even let Coy and Vance get a cameo.) But this. This is over the line.

And guess what? They’re also making the A-Team into a movie.

Can’t they leave just one thing from my childhood alone? And you want to know the worst part? I’ve got five kids. I might actually have to go see this stupid thing because these kinds of things are like kid crack. They get a little and they want more. They’re going to see these smurfs on television or hear about them at school or they’ll just see some spoiled kid with a Smurf backpack and instead of striking him down for the good of the country which is the appropriate action, they’ll want to know more of these things you call Smurfs.

And it’ll get inside their cute little heads and pretty soon they’ll be arguing over which one gets to be Smurfette when they play Smurfs. But I’m telling you now. I like playing with my children but I will not be Gargamel. I won’t. I just won’t. I’m not smurfin’ kidding.