Not Jesus In Ikea?! 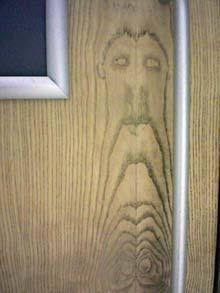 Many people are saying they see Jesus in an Ikea bathroom. Don’t believe me? The pic is right here and the story from the UK Telegraph.

A bearded face, with long flowing hair, is plainly visible on the wooden door of the men’s toilet in the Braehead outlet of the Swedish furniture and meatballs giant.

There is some debate over whether the face truly represents the Son of Man, or whether it is in fact Gandalf out of the Lord of the Rings, or even a member of ABBA.

One shopper said: “It takes you by surprise. It is really clear in the wood.

“I was only heading to the toilet and found God.

My thought is that if it’s got people thinking about God it’s a good thing. Even in the bathroom. But I also doubt that God would have anything to do with Ikea. I’ll explain. I’m pretty sure God doesn’t like Ikea.

If God liked Ikea or approved of Ikea in any way I think His creation would look a lot different.

1) The world would be a lot boxier and a lot less comfortable.

2) God gave us free will to go and do what we want. But Ikea makes you follow that stupid line on the floor so you have to walk through the entire store just to pick up a lampshade.

3)There were no Allen wrenches used in the construction of the world. (See Genesis)

4)The world would’ve been presented to Adam and Eve in a box for them to construct. And mankind would still be working on it because Adam and Eve would’ve thrown out the instructions printed in six languages.

5) The universe would’ve fallen apart a long time ago if Ikea had anything to do with it.

On the other hand, Ikea’s swedish meatballs are heavenly.

(Thanks to Lori for the heads up on this one)