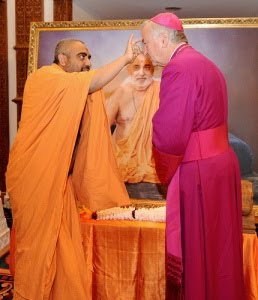 Oh dear. I will stipulate that the Archbishop probably does not believe in these pagan gods, but how dumb can you be? Damian Thompson says, “The offer of the candle and the words accompanying it imply that Hindus worship the same God as Christians, which I would have thought even a primary-school textbook would make clear is not the case.” Yes, even a schoolgirl would know better.

So why would someone like Archbishop Nichols, who should and presumably does know better, do something like this? The short answer is that someone forgot to tell the good Archbishop that this old school Jurassic ecumenism is dead. This old school ecumenism,ya know the kind that says that it doesn’t really matter what I believe or what you believe had been very sickly since 2005, finally died last month. One can forgive poor ol’ +Vin, so caught up with the surprise Anglican Apostolic Constitution, he may not have heard the news.

So please, if any of our readers are in the UK, somebody run over and tell +Vin that his old buddy passed away. Maybe we can then avoid this kind of embarrassment in the future.

Oh, and by the way, would somebody be kind enough to let Cardinal Kasper know? I don’t think he has heard the news either.