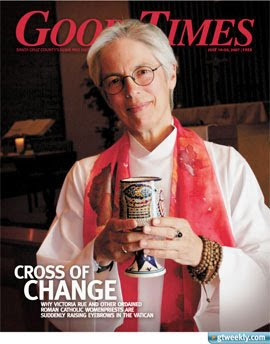 The Catholic Action Network has been quite busy lately protesting the church’s stand against gay marriage. No surprise there. The group describes itself as “a network of progressive Catholics seeking justice both in the Catholic Church and in the world.”

Well, today they’re holding a workshop called the “Creative and Liberating Liturgies Workshop Facilitated by Victoria Rue, Ph.D.” Rue claims to be an ordained Roman Catholic priest as well as a feminist and lesbian.

Sorry I didn’t inform you of this earlier as it’s scheduled for today. Just imagine the hilarity of sending some CMR readers to this workshop with some hidden cameras. I know you’re kicking yourself for not signing up for it earlier but if you read this you’ll get a pretty good feel for what’s going on.

Oddly, even though it’s a liturgy workshop I didn’t see the word “Tridentine” mentioned anywhere in their application form but there were a few mentions of “a sense of shared presence” and “Feminist ritual” as you might imagine.

Bring your frustrations, your hopes and a willingness to explore new paths. Please wear comfortable clothes and shoes that would allow you to engage in movement.

The Learning Goals of the seminar are what, you might ask? Get ready. This is where you get on the express to Crazy Town. Keep your hands outside the vehicle at all times because otherwise you might be tempted to pull out your hair.

Learning Goals:
•To provide participants with seeds that can flower into ideas and inspirations for their own creation of liturgies
•To offer theatre skills that can be utilized in creative and liberating liturgies such as characterization, improvisation, monologue writing.
•To understand and appreciate the value of embodied worship as well as experience it as vital to a worshipping community
•To challenge each participant to dream and act anew for the renewal of ourselves, our communities and our world.

Druid attire is optional, I guess.

Come on folks. A bunch of druidesses raising beer steins while shouting incantations in pig latin doesn’t make it Mass.

Mind you, not one mention of Jesus anywhere but what were you expecting? I mean, what’s the meaning of this talk about “seeds that can flower into ideas?” Are they admitting that they can only aspire to “seeds” that one day maybe kinda’ could perhaps become a full fledged idea?

And all this talk of monologue and improvisation sounds like a bad version of Jay Leno or maybe a really boring version of “Rent.” Oh wait…

And what does “embodied worship” mean? Sign me up for disembodied worship. I’ll just tell them I astrally projected myself to the workshop instead of actually having to show up. And I won’t have to wait on those long airport lines.

But wait. Here’s the best part. The question at the bottom of the form is for lunch.

Are you a Vegetarian or Vegan?:

Yes! I can honestly say I’ve never attended anything where they even had to ask me that question. Probably never will unless McDonald’s brings back the Veggie burger.

Mad Props to Saint Louis Catholic for this one. Check him out over there. There was a really funny comment too saying “You didn’t mention that way down on the bottom it says B.Y.O.B. “Bring Your Own BROOM.”