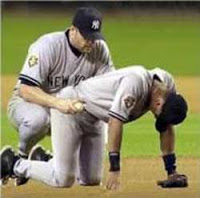 Seattle Times has this priceless story:

Three bisexual men are suing a national gay-athletic organization, saying they were discriminated against during the Gay Softball World Series held in the Seattle area two years ago.

The three Bay Area men say the North American Gay Amateur Athletic Alliance in essence deemed them not gay enough to participate in the series.

The group that puts this sportsapalooza together states that each team can have no more than two heterosexual players. Well D2 smacked around many other teams and one team got mad about it and bitched that the team had too many straight men.

Then the McCarthy type Inquisition began. The three who were suspected of not being gay enough were dragged into a tastefully decorated Star Chamber of sorts in front of more than 25 people, and were asked “personal and intrusive questions” about their “sexual attractions and desires.”

The alliance ruled the three men “nongay,” stripped D2 of its second-place finish and recommended that the three players be suspended from participating in the World Series for a year, according to the suit.

Now, the three men are suing and asking for $75,000 each for emotional distress, invalidating the findings of non-gayness and reinstating the team’s second-place finish.

You seriously can look for years and not find a better story than that on the interwebs. Gay advocates are constantly screaming about discrimination yet the gay softball league has a litmus test on how gay you have to be? Their legal argument seems to be that they’re a private organization and they should be able to discriminate who gets to join. Hmmm. That’s kinda’ the same legal defense as the Boy Scouts, huh?