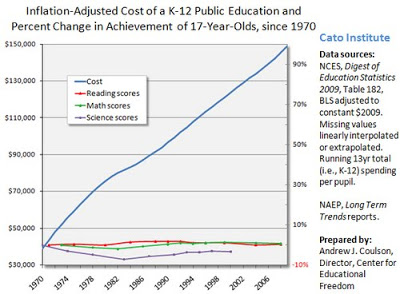 Various videos of Gov. Chris Christie of NJ have been been making the rounds lately. None are more controversial than those in which he confronts a teacher over her pay and takes on the teachers union. I will post them again below as they are really worth watching.

What I thought that I would do today is add a little context. The following graphic is from the Cato Institute (via AceofSpades). It shows the real education spending in inflation adjusted dollars vs test scores.

This is as damning a chart for our education system as possible and it is teacher’s unions that are responsible for much of the increase in spending.

If you graduated from high school in 1980, your entire k-12 education cost your fellow taxpayers about $75,000, in 2009 dollars. But the graduating class of 2009 had roughly twice that amount lavished on their public school careers. The extra $75,000 we’re now spending has done wonders for public school employee union membership, dues revenue, and political clout. It’s done a whole lotta nothin’ for student learning (see chart).

This proves in my mind that Gov. Christie, no matter how unpopular it may be, is doing exactly the right thing in NJ by taking on the teacher’s unions. As he said, when it comes to taxes, this isn’t A fight to pick it is THE fight to pick.