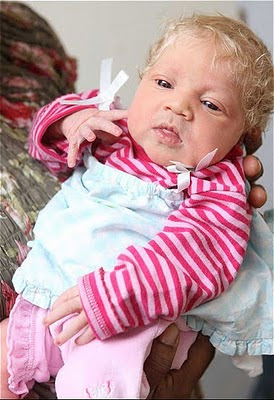 What with “cracker babies” being all over the news lately, they are apparently such a hot item that everybody wants one!

Geneticists are at a loss to explain this one! She is not an albino and the parents have no known white ancestry.

The parents are treating the birth with faith, joy, and humor!

Ben told yesterday how he was so shocked when Nmachi was born, he even joked: “Is she MINE?”

He added: “Actually, the first thing I did was look at her and say, ‘What the flip?'”

But as the baby’s older brother and sister – both black – crowded round the “little miracle” at their home in South London, Ben declared: “Of course she’s mine.”

Blue-eyed blonde Nmachi, whose name means “Beauty of God” in the Nigerian couple’s homeland, has baffled genetics experts because neither Ben nor wife Angela have ANY mixed-race family history.

Pale genes skipping generations before cropping up again could have explained the baby’s appearance.

Ben also stressed: “My wife is true to me. Even if she hadn’t been, the baby still wouldn’t look like that.

“We both just sat there after the birth staring at her for ages – not saying anything.”

Nature is a funny thing. May God bless their family.