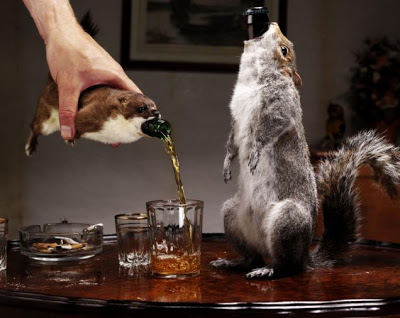 OK. Could this be the greatest drink ever? The Metro UK reports:

BrewDog, of Fraserburgh, Aberdeenshire, is the firm behind the new ale that’s apparently stronger than whisky and vodka at 55 per cent volume….

Twelve bottles of The End Of History have already slid off the production line and been placed inside seven dead stoats, four squirrels and one hare.

Yup. That’s right. Beer served from the carcass of a dead animal. It’s kinda’ primal and technologically advanced at the same time.
Mind you, they say the animals died of natural causes but who knows? With guys that are willing to brew beer for dead animal containers, it’s not that hard to imagine them chasing down squirrels in their neighbor’s backyard. Predictably, animal rights activists are…shall we say…a bit upset.

Advocates for Animals’ campaigns director Ross Minett blasted the brew in reports saying: “Using shock tactics to get attention is terribly out of date, especially when this involves exploiting or degrading animals…The modern approach is to celebrate the wonders of animals and respect them as individual sentient creatures.”

Animal rights activist Libby Anderson said: “It’s pointless and it’s very negative to use dead animals when we should be celebrating live animals…This seems to be a perverse idea…It’s just bad thinking about animals, people should learn to respect them, rather than using them for some stupid marketing gimmick.”

You know, all this outrage would be a wee bit more compelling to me if animal rights groups had any outrage whatsoever over the Neocutis line of anti-aging skin cream which is made from the cells of an aborted human baby. Talk about perverse. So spare me the selective outrage for “individual sentient creatures,” O.K.?

When I see the folks from PETA out there protesting the deaths of unborn humans I’ll be impressed. When they get there they’ll be able to find me easy. I’ll be the guy drinking out of a dead squirrel.