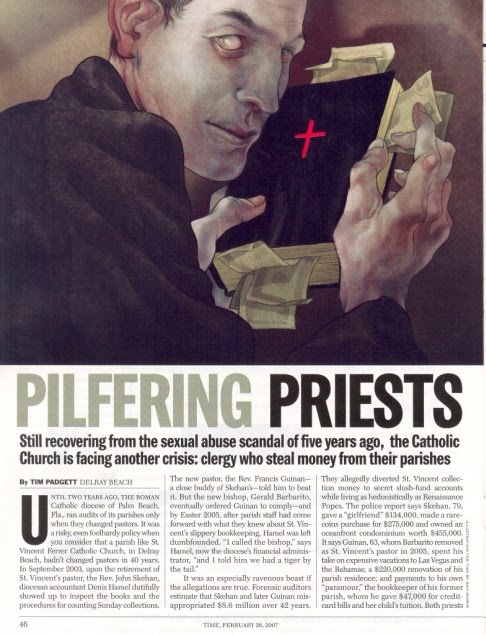 Did anti-Catholicism play a role in Time Inc forcing their CEO out the door?

This story in the New York Times might make you think so.

But the story is notable for a couple of reasons. The Times reports that company insiders criticized former CEO Jack Griffin for making politically incorrect remarks. But after reading Griffin’s remarks I can’t imagine how anybody even remotely sane could consider his remarks politically incorrect.

Check it out. The Times reports that Griffin, before working at Time, had headed up Meredith,a women’s magazine publisher,:

Mr. Griffin also made what some executives considered to be the occasional impolitic remark. In one of his first mass interactions with Time Inc. employees at a town hall meeting, he told them, according to one executive there, that he was finally at a company “where I can actually read the magazines,” an apparent reference to the fact that Meredith publishes women’s magazines.

So the guy worked at a publishing house that printed women’s mags and he said he didn’t read them and that’s offensive? How? In what world could that possibly be offensive that a man doesn’t like reading women’s magazines?

But here’s the thing. After criticizing Griffin for his “impolitic” comments, the Times reports without any reservation that Griffin’s Catholicism likely played a role in his getting forced out.

Check out this graph:

Mr. Griffin, a Roman Catholic, made some in the company uneasy by referencing his faith in meetings and interactions with subordinates, two company executives said. On at least one occasion, he compared Time Inc. to the Vatican as a way of illustrating its prestige and might, these people said. Mr. Bewkes personally intervened, asking Mr. Griffin to tone down the religious references…

Personally, I think if anything The Vatican should’ve been upset by a comparison to Time Inc. But maybe I’m biased.

But think about that. Griffin saying he didn’t read women’s mags is offensive but Time Inc. freaking out about a positive reference to the Vatican is perfectly fine and is actually used as evidence that Griffin needed to go?

I don’t know who’s crazier here, the ninnies at Time Inc or the clowns at the New York Times who don’t seem to have a problem with it.

Note: This shouldn’t come as much of a surprise in that in 2007 Time ran this story and pic with barely any facts to support it.