Station One from Leonard Porter’s Studio 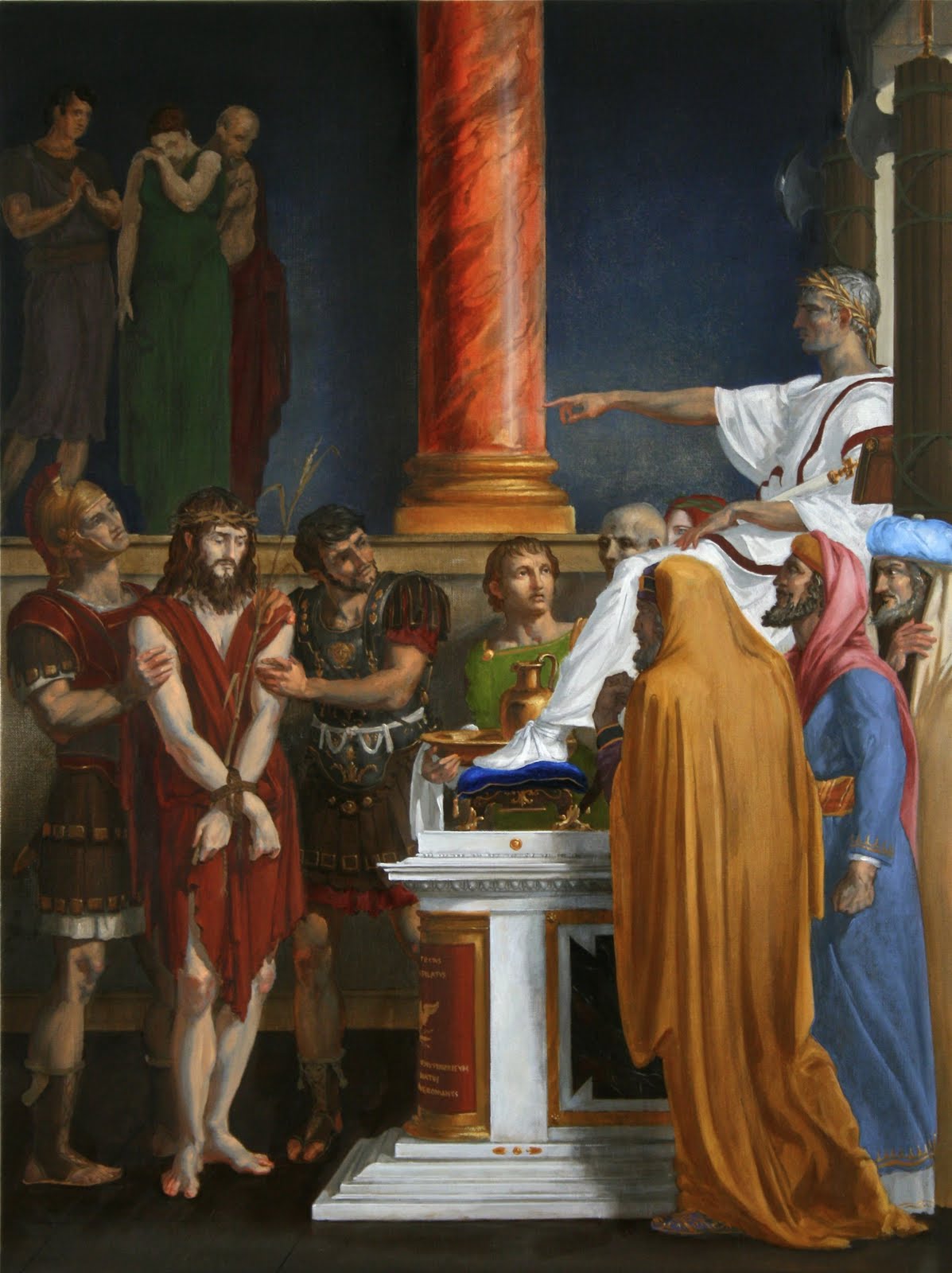 Station One from artist Leonard Porter’s new set of Stations of the Cross reveals not only an excellent meditation for Lent, but gives evidence of a renewed interest in layered, meaningful and intellectually rich sacred art. Porter, who specializes in paintings of classical antiquity, brings his vast wealth of knowledge to the Stations, making them not only emotionally moving, but intellectually rewarding.

Station One begins with Christ standing before Pilate surrounded by members of the Sanhedrin, who clench their fists in anger and demand vengeance on Christ. Holding a reed and wearing the crown of thorns, Christ stands serene and powerless before Pilate, who is raised up on a white marble throne which sits on a pedestal much like a statue base. Shown in perfect profile, Pilate appears frozen. His senatorial toga makes him nearly as white as the pedestal on which he sits, reinforcing his statue-like appearance and indicating that his power is merely external and worldly. Axe heads and fasciae stand behind Pilate’s throne, symbols of earthly power and authority, while Christ is bound and passive, the true King humbly accepting the judgment of an earthly king. Pilate points at Christ, ordering his suffering and death, yet he also directs the view of the one praying the Stations: go and walk the via crucis.

Two Roman guards hold Christ, figures who will appear repeatedly in the Stations. The bearded soldier wears a white belt, indicating that he is a Roman general. The other man in the helmet is Longinus, a centurion who grows in his love and appreciation of Christ as the Stations progress. The general wears a leather girdle with a breastplate showing Medusa, the monstrous Gorgon whose glance could turn a person to stone. This general would be unmoved by Christ’s passion, his stony heart untouched by grace.

By contrast, the centurion Longinus wears an image referring to the mythological story of the Choice of Hercules. In this story, Hercules is visited by two nypmhs representing Pleasure and Virtue, and he is given the choice between a pleasant and easy life or a severe but glorious life. Hercules chooses the life of virtue and glory, despite its difficulties, an apt analogy for Christ’s redemptive Passion, since in choosing obedience to the Father, He suffers but rises again in glory. It also sets the stage for Longinus‘ own conversion on the Way of the Cross, that he himself will choose to suffer with Christ with the hope of future glory.

In the background, a blood-red column prefigures the Flagellation at the Pillar, with the stripes of the marble itself imitating the wounds of Christ’s back. An eerie skull-like figure appears over Pilate’s knee, foreshadowing Christ’s crucifixion at Golgotha, the “Place of the Skull.” As the procession moves from station to station, the figures will grow in number, the scenes will get more frenzied, the weather will grow darker, and different people representing all of humanity will enter and depart from the scene, indicating that all sinned and that all were redeemed.

Those praying this set of Stations see themselves in the images, simultaneously the sinner and also Longinus, who will choose the virtuous life by walking with Christ.