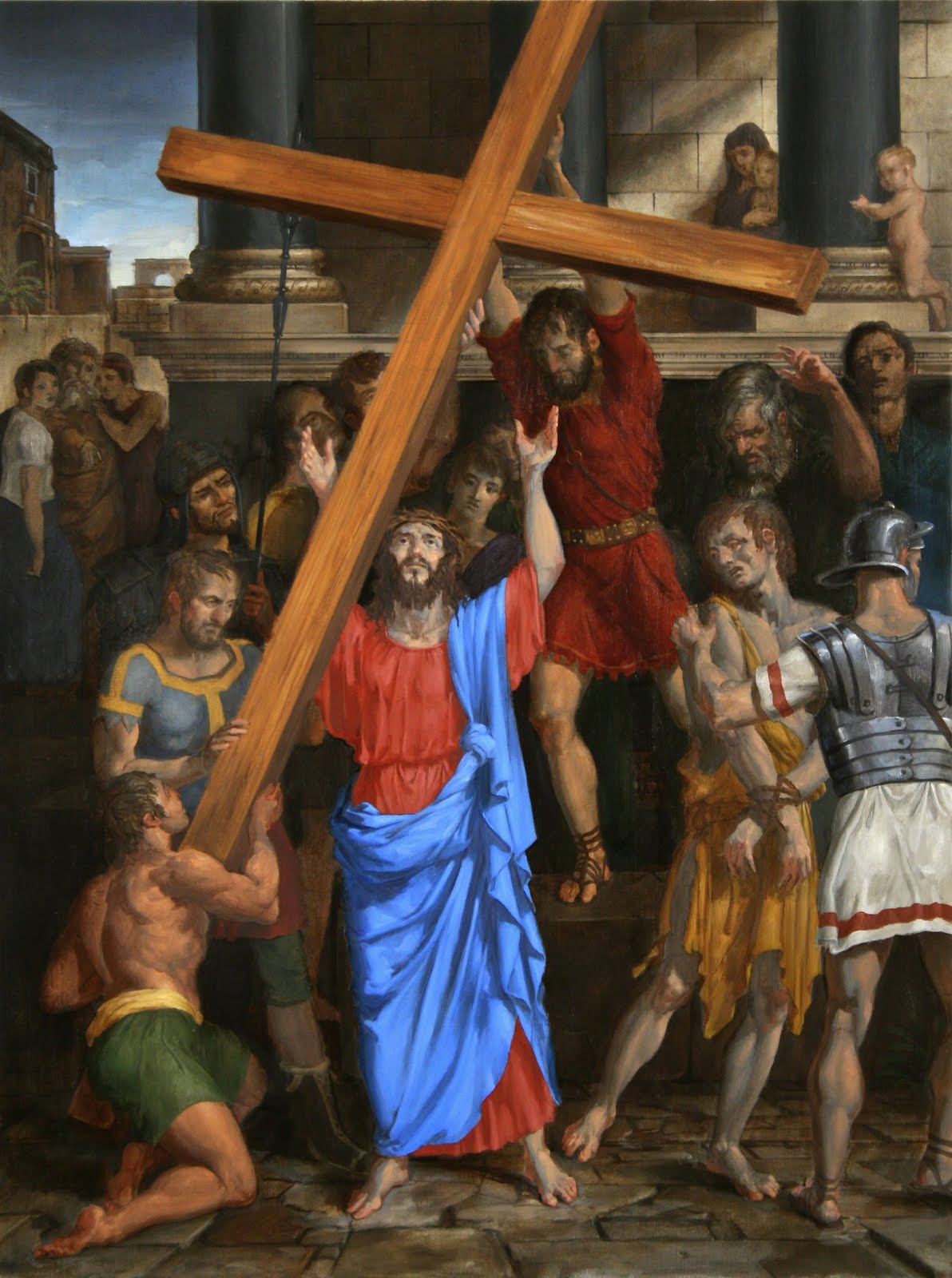 Station Two from artist Leonard Porter’s new set of Stations of the Cross reveals not only an excellent meditation for Lent, but gives evidence of a renewed interest in layered, meaningful and intellectually rich sacred art. Porter, who specializes in paintings of classical antiquity, brings his vast wealth of knowledge to the Stations, making them not only emotionally moving, but intellectually rewarding.

This station shows Christ taking up his cross. Rather than having the cross laid upon him, Christ reaches up for it, indicating his eagerness to do the Father’s will even in suffering. While his pose suggests reaching for the cross, it also speaks of the orans position of prayer found commonly in the Mass. Christ simultaneously looks up the take the cross and to pray to his Father in heaven. Porter frequently “quotes” ancient art work, and Christ’s pose is derived from the pose of a Greek bronze from about 300 BC. In this way, Porter’s art not only speaks to today’s needs, but subtly layers images from history into a new painting.

Light and shadow come into high relief here. Christ’s clothing uses gem-like colors of red, indicating Christ’s humanity, and blue which indicates his divinity. The painting’s other figures were not only painted with less vibrant colors, but a smoky, semi-opaque glaze was put over the painting at the end to tone them down and place them in an almost imperceptible shadow.

Unlike the relative calm of the first station, station two moves outside and has more figures doing different things. The man in the yellow being led off is the “Good Thief” who will reappear later at the crucifixion. Background figures show differing emotions. Some show grief, others anger. A mother and two children in the rear near the column not only appear as grief stricken bystanders, but recall images of the Virgin and Child with the infant St. John the Baptist. Note how the one child standing alone embraces the column while subtly pointing toward the infant Christ, just as the Baptist pointed the way for Christ’s coming. In the back left a group of philosophers gather and discuss what this could all mean. Some are old, some are young, some male, some female, allowing the people who pray with these stations to see themselves there with Christ.

Over the shoulders of the philosophers, a small palm tree indicates that this is Jerusalem, yet much of the architecture looks Roman. Here Porter intentionally departed from a literal sense of the location of the Way of the Cross, making something outside of a particular place and time. While acknowledging the factual reality of Christ’s time in the Holy Land, the image also speaks of the Church’s future in Rome. Porter intentionally used differing points of view in perspective. The design is not based on single-point perspective, like a renaissance painting, but with many perspectives, like an icon. These multiple points of view subtly add to the sense of chaos of the human and divine drama. Christ’s Passion was meant to restore the world to order from chaos, yet he accomplished this by absorbing all chaos in his own person.

Interesting to note as well is that the men who lead Christ along with whips and angry comments (shown here as a shirtless man in a green tunic and another in blue) change in every station. Unlike most sets of stations which show a simple narrative of the same figures moving from station to station, those who lead Christ to the crucifixion will, over the course of the 14 stations, change in age and racial characteristics. In this way, Porter indicates that it was the sins of all of humanity which led Christ to his death.