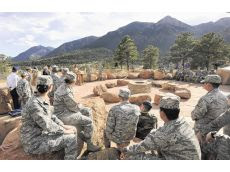 The Air Force Academy just opened their outdoor shrine for druids, wiccans, and all sorts of new-age type folks. It kinda’ looks like lazy Stonehenge with a little feng shui mixed in.

I gotta’ ask, is there really a big call for this? Are there so many druids in the Air Force Academy? Seriously, if they wanted to do something nice for the new age folks, they should’ve just subscribed to the Oxygen network and called it a day.

I think Fr. Jonathan Morris nailed it when he, according to Fox News, described this “politically correct cowardice by bumbling bureaucrats,” adding, “behind the smoke and mirrors of the supposed high demand for ‘Earth worship prayer circles’ is a small group of activist atheists in America who seek first to water-down and then to abolish the name and face of God from the public square.”

Hey, it just occurred to me, what do wiccans need the Air Force planes for. Can’t they just fly on their brooms?